They say that behind every successful man there is a great woman, and for Marino Vignoli, such is the case: Bazar 48 belongs to his wife, Anna Maria Piazzini, but he has entered the hearts of San Casciano residents as well… and he intends to continue the reciprocal affection that he has with our community.

“Anna and I met at Poggetto during the gasoline prices of 1972/73,” Marino tells us. “You couldn’t drive the car on Sundays, so we went dancing by traveling on the Sita bus”. 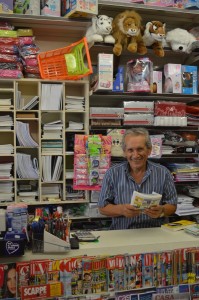 Marino is from Firenzuola, but is a “sancascianese” by adoption. “We got married in 1978 and a year later we bought this newspaper shop,” he remembers.

“I worked for a pharmaceutical company in Sesto Fiorentino for 33 years, while Anna followed her passion”.

Marino started helping right away, but helps even more now that he is retired. He used to take care of stocking the shop, because the company didn’t deliver: “I went to work in Sesto and it was easy for me to bring the merchandise. Doing everything wasn’t easy and I sometimes lost something along the way,” he smiles.

“One year,” he tells us, “I put lights for the Christmas tree in the baggage carrier on top of the car. When I stopped on the parkway to see if I had to tighten something, there was nothing there! A man stopped and told me that I had lost everything on the road past the American cemetery. I tried to ﬁnd everything but it was dark. Luckily I wasn’t hit by a car!”.

“Another time,” he continue, “I went to pick up stationery. I was in Viale di Novoli and someone next to me made a signal. I thought he was saying hello and I returned his salute. While I was asking myself who he was, I saw a paper ﬂy by my rear view window. I had left my agenda on the roof and that person was trying to tell me”.

The name of the store signiﬁes that a little bit of everything is sold inside. When you visit “da Marino”, it isn’t easy for parents with children, who immediately disappear in the toy corner. You go to the store to buy some batteries and leave with a water pistol and stickers.

“The job would be monotonous if we only sold newspapers,” says Marino. “We have stationery items, paper goods and toys”.

37 years of a newspaper store and a life in San Casciano: “We want to continue our business for as long as possible,” concludes Marino, “even if our children have made other choices”.

You can see that the spirit of Bazar 48’s customers is contagious, as they reﬂect the enthusiasm of the children who play among their toys and choose a favorite stuffed animal.