Every shop in San Casciano has an unmistakable odor which unconsciously brings back memories. We were the children who stood on tiptoe to read the names of ice cream ﬂavors on the counter.

Now that we have grown up, once in a while, a familiar odor brings us back in time. Mauro Marranci hasn’t changed: a smile for everyone and a little shy, but with a profound love for his town.

He was born here and has always lived here, but, above all, he has worked here almost every day of the year… except for Thursdays, closing day!

The dairy shop that carries his last name, opened its doors in 1965: “ My father worked at Maglio’s, at the Caminetto“he smiles, “but you certainly don’t know who Maglio is because you are too young. He was one of the milkmen of the town. He restructured the locale and stoppped selling milk, so my father put milk here”. 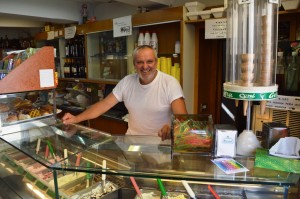 The store sign also changed a while ago. It had been the same since 1983. “We have been making ice cream since 1978. My father learned from Maglio and I was helped by the recipes”.

Mauro Marranci knows a lot about community because, as a passing customer tells us, he is a combination of all possible generations; the elderly and mothers and their children alternate in a continuous ﬂux.

The dairy shop is never empty, and you can see in general how society is changing.

Mauro and his colleague Paolo Faggioli, known by all as “Chiodo” are completed by the kind Sandra Marranci, Mauro’s sister, Paolo’s wife.

The conversation ends with a conventional handshake, but you can see that Mauro isn’t satisﬁed. So, with a bit of hesitation he chooses a warm and sincere hug… for another young girl who he watched growing up…. and he smilingly says goodbye.