Today we are visiting Flavia to learn her easy and fast recipe for “passatelli romagnoli”.

Flavia has been living in San Casciano since she married Sergio in 1969. She is known in town as a volunteer with the town “Misericordia” and conﬁded in us that she has never forgotten her region of origin, which she left when she was seven.

She learned the recipe from her paternal grandmother and then from her mother, Ada, who made the passatelli without using a written recipe. “Most of all” she tells us, “I like to cook dishes from Romagna, especially sweets. I always add our spices to Tuscan recipes.” 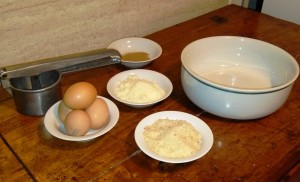 We follow her to the kitchen where beef broth is already boiling. She tells us that “passatelli can be served in broth or dry, with the addition of any type of sauce”.

All the ingredients are on the table. Flavia, with her expert hands, quickly prepares the passatelli, reminding us that they should be made while the broth is boiling so they can be added and quickly removed once they are ﬂoating”.

“If you want to cook them the next day – she tells us – let them dry on a cutting board and coat them with some breadcrumbs before cooking them”. 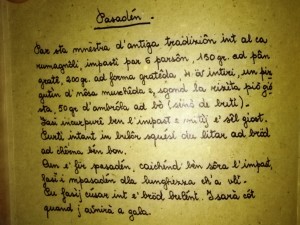 INGREDIENTS for 6 people: Six eggs; 200 gms of grated Parmesan; 150 gm of breadcrumbs; nutmeg to taste; a pinch of salt

PREPARATION: Combine all of the ingredients into a ball and mix them with your hands until you get a solid and homogeneous dough.

Let the ball of dough rest while the broth begins to boil. Break up the ball into parts and pass one at a time through the potato masher, putting the passatelli on a wooden board as they come out.

When they are already, put them in the broth and remove them when they ﬂoat.