One of the historic locales of Tavarnelle can be found in via Roma 202, facing Piazza Matteotti. It is Caffè Italia, commonly called “Bar Italia”.

The bar is found in the center of town along the main road and is a common meeting place for everybody. It is open every day except Sunday. Bar Italia is small but warm. 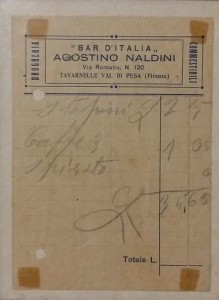 It will make you feel at home with its constant comings and goings. It even has its original recycled furniture Irene stands behind the bar. She was born and raised in Tavarnelle.

She has short hair looks younger than her age of 42. She is helped by four young people. Irene is always cordial and hard-working and has been a ﬁxture in the bar for a quarter of a century.

“When I was very young I worked in a metal factory,” says Irene. “An ex-boyfriend and I decided to open a café. We looked at “Pedale e forchetta” (now “Borgo antico”), but a restaurant was too challenging”.

“Before me,” she says, “there were Riccardo and Antonella, future owners of the pizzeria, “La Serra”. Before that, there was Sestilia, a dairy store. We are not sure exactly when the business started, But we know it was already active in the 1930s”. 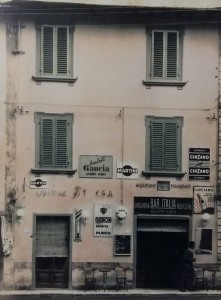 “I have watched Tavarnelle evolve,” she continues. “The bar used to have three telephone booths. I remember when via Roma was a two way street. The bus stopped here in front and the old Piazza had a fountain”.

“Work for me hasn’t changed very much,” she explains. “Breakfast isn’t an important meal anymore. Aperitifs and express lunches are common: ﬁrst courses, hamburgers, salads and cheese and meat boards”.

“In the summer, during market season, we organize Tuesday evenings with music. We put a sort of booth outside. Sometimes we have 200 or 300 kids with a drink in their hand”.

“We also have events in the winter,” she adds. “Last year we had a sommelier who explained wine processing and characteristics during the course of three dinners. We have also established the “aperi-single”, where new couples can be formed”.

“Our clientele is varied,” Irene concludes. “We have youngsters and retired people, but mostly the 25 to 30 year old group. There is a play area for children. Our customers are people passing through and die-hard “tavarnellini”, always ready to tell a joke”.