Those who frequent outdoor markets surely know her: she is Stefania Maioli, from San Casciano, and she is often present with her crocheted handbags in the main piazzas in the towns of Chianti.

They are colored, light and of various forms. They have a touch of originality which often makes the difference. Stefania is a representative of the Florentine artisanship still present in our territoy: the hand made, often learned while small, that is part of our tradition; an antique ﬂavor which is a step behind technological progress.

“In fact,” says Stefania, “when I was an adolescent in Lucardo, there was a Chinese church that was adopted by a lady. We young girls went to the priest’s mother to learn the various stitches of crocheting (chiaccherino, uncinetto), and she also taught us languages since she was the daughter of the Maltese ambassador. She was a highly educated woman, and we enjoyed passing time with her, learning these things”.

Stefania’s passion continued to be cultivated and one day; “I began to travel the markets, and looking at the artisan stands, I thought that I too could take advantage of my passion for crocheting, making things and introducing them to many people”.

And so, around four years ago Stefania began to crochet handbags, keeping up with the sector and trying to understand what women would like. 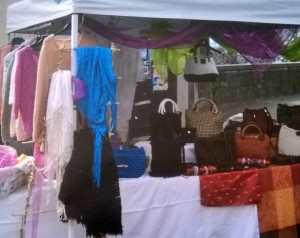 “The work takes a long time and you must be patient,” she tells us. “Before choosing the materials for the base of the bag, you must make wholes and then, with a cord or rafﬁa, you work around until you ﬁnish the bag. You need a decisive hand because the thread must be very tight. Then I add handles and a closing. It takes me about a week to make a handbag and often the price of the bag doesn’t pay back the time and creative labor”.

Stefania is almost a full-time grandmother and she dedicates herself to her work in the evening until late at night or early in the morning.

“For this reason,” she tells us, “I wish that the handmade world was more valued by those who buy. People always want a discount without understanding how much work it involves”.

Her future project is to participate in some important markets in Florence to make her bags known to foreigners who appreciate the “made in Chianti”.

We hope that they appreciate Stefania’s “made in San Casciano” and we wish her “Buon lavoro”! (Enjoy your work!).