These are the ﬁnal days of Carnevale, when “frittelle di riso”, “cenci” and Florentine “schiacciata” are always found on our tables.

We met a young woman from San Casciano who told us about her grand passion for pastries. She also gave us a new recipe for frittelle di riso, the way her grandfather, Franco, used to make them.

Paola Falli is known in town for her job as secretary at the Chianti swimming pool. She is 32 years old and ﬁnishing her architectural studies. S

he has been spending her free time for the last four years preparing sweets and on her pastry blog, “I dolci di Paola dal Pian di’ riposo”.

“For a birthday,” Paola tells us, “my cousin gave me a book on cake design. From there I began to try it out and buy other books. Slowly, I saw that the cakes came out very well so I began to put the recipes and photos on Facebook”. 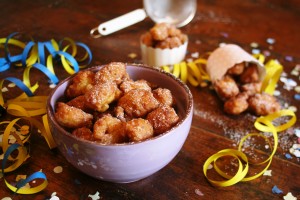 “Then,” she continues, “I invented a logo for my page with a University friend. That is where I put all of my creations”.

The name of the page is easy to ﬁgure out. Paola lives in via Borromeo, at the point where the steep climb going up to the Botte becomes a ﬂat road. Animals used to stop there to rest before the last effort to arrive in town. That is where the name of her blog comes from (pian di riposo = place of rest).

“The recipe for the frittelle,” she explains, “is from my grandfather, Franco, who worked at the Tipograﬁe Stianti for most of his life. The recipe was handed down within my family. Grandpa Franco loved to eat and when he tried out a recipe that worked, he wrote it down in this little notebook which I hold as dear as gold”. 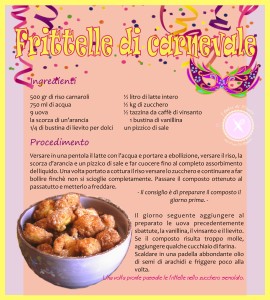 Paola hopes to be able to give more visibility to her blog and photos by putting them on the YouTube channel. “Through a ﬁxed post,” she continues,” I can make small video shots to be sent quickly with writing. In that way you can see the recipe in a minute”.

Paola has many followers, but don’t forget to put a “Like” on her Facebook page while you are preparing her recipe for frittelle di riso.