This is a special Spring in the Osteria di Passignano’s kitchen. Where the vegetables, for the most part, are grown on the doorstep – giving the farm-to-table concept a higher meaning.

They are cultivated with a technique that has its roots in an ancient past that here, in the shadow of the millenary Benedictine Abbey, is also tinged with magic and hints of the Medieval.

We’ve visited the bioactive vegetable garden of the Osteria twice. We first came in late winter. Now we’re back, in full spring.

We’re shown around by its creator, the agronomist Andrea Battiata, patron Marcello Crini and chef Nicola Damiani. Luca is waiting for us, he’s the one who takes care of it daily with the utmost care. 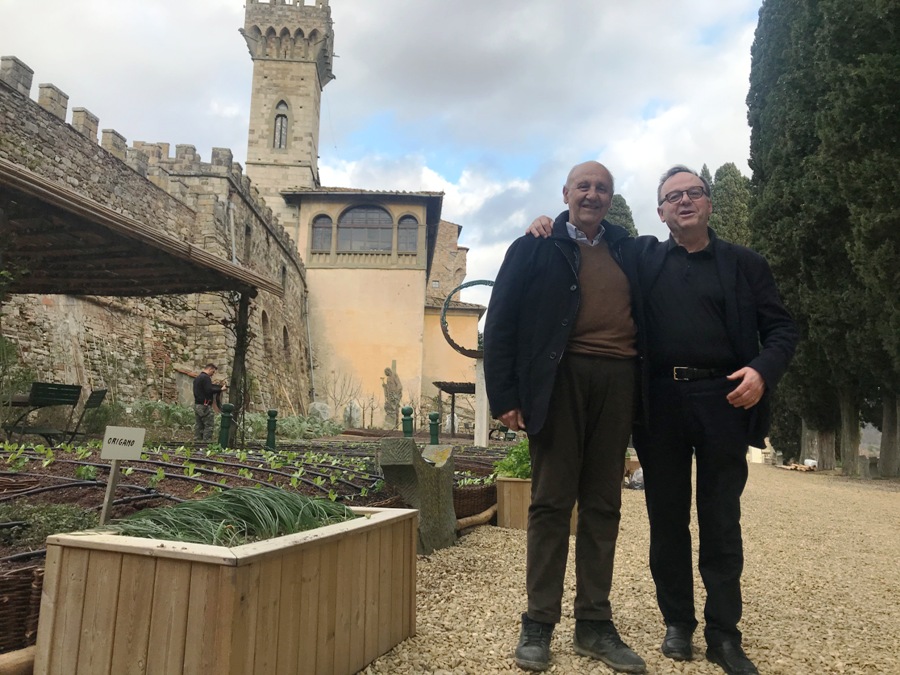 “The Medieval gardens – Battiata explains – were ‘full-circle’ gardens, typical of a circular economy. The only alternative at the time. Here today we’ll also be organising an area to make compost, recreating the circular economy typical of the past, using what’s discarded in the kitchen. This is a clear choice, that means not only recovering the waste, but also putting the carbon back into the soil “.

“The vegetable garden – explains Battiata – was typically divided into three parts and we’re doing the same: the vegetable garden, the orchard with fruit trees and the area where medicinal plants were cultivated. The garden was used by the monks to produce beans, peas, broad beans, to complement the flour part of the bread. The waste was given to the animals. And the manure put back into the cycle.”

It’s fascinating to hear this ancient story that comes back to life today, as we look up at the Abbey’s crenellated walls.

Marcello Crini’s eyes shine when he looks at this vegetable garden. Right at the center of this wonder there are two “dehors” where “guests of the Osteria – he tells us – can enjoy an aperitif or a meal”.

The restaurant and the monks have been sharing the products of the garden for the past two years, since the time the restaurant started to grow its own vegetables.

Now, however, they’ve taken an important step.
“We’ll bring back the vine to make vinsanto – says Battiata – the olive tree for the holy olive oil and the cypress which represents a prayer for the Lord”.

The basic seasons are essentially two: the summer season with its tomatoes, aubergines, courgettes, green beans. And winter with its rapeseed and cabbages.

What about the soil? “With the bioactive garden technique – Battiata continues – the life of a wood, of a real forest, is activated thanks to the abundance of organic matter. It takes a hundred years to make a forest, but here we do it quickly, using organic substances, minerals and micro organisms. All of it by-products from other supply chains. Compost, volcanic sand … “.

A woven willow fence encircles this land, which is so rich and unique: “This too was an art” reflects Battiata.

In short, here we find food for the body and mind; there’s also a study done by the University of Florence and Pisa dedicated to this garden.

“We don’t use any kind of protection on the plants – concludes Battiata – They are simply given the ideal conditions to not get sick. This is the way it should be for people too… “.