“Pan di ramerino” (typical Florentine rosemary bread) was born in the Middle Ages. It is symbolic of Holy Thursday and with its unique frangrance, is made of perfect contrasts.

Pan di ramerino is a devotional product and each of its ﬂavors is tied to a symbolic signiﬁcance. It is an emblem of the immortality of the soul and during the Middle Ages it was thought that rosemary kept away evil spirits.

Grapes and grain, metaphors of life, represent holy Communion. In addition, the bread is cross cut, a fact which favors leavening, and gives the image of the connection between religion and this bread, consumed by the upper-middle-class today and, once tasted, appreciated by youth. 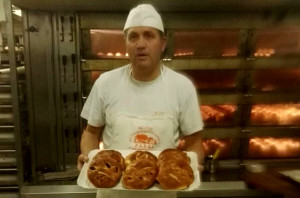 Stefano Panti, owner of the bakery in piazza Matteotti in Tavarnelle remembers: “My father used to make this when our business was run in the old bakery, “Bati”, in Via Roma”.

“On Easter Thursday,” he continues, “ the “treccone” Nocchio passed by with a full basket and shouted, Pan di ramerino is here; it is full of zibibbo and oil, not greasy, referring to those difﬁcult times”.

“We used to sell it to the churches during Lent: it was blessed and given to the faithful in exchange for an offering. Since the 1980s it is sought-after and prepared all year long except for August and September when we make foccaccia with grapes”.

“One of the main ingredients has changed,” he explains.” We used to use local grapes, then “zibibbo”, with seeds and now we use Chilean grapes, without seeds. Though now we use machines and it is not made by hand, the dough is the same as always”.

“We add a mix of sautéed olive oil and rosemary to bread dough, sugar, ﬂour, salt and yeast,” concludes Stefano. “Grapes are added at the end to obtain an ancient taste, not too sweet, inherited from our grandparents”.