Once upon a time there was “vino da tavola” (table wine), an appellation used in the past to deﬁne those wines produced outside of certain rules.

They were simple wines, without particular or signiﬁcant characteristics, often destined to simple tables. They were products which, thanks to the qualitative force of some of its examples, brought to the birth of the deﬁnition, IGT (Geograﬁca Tipica), then changed to the European Community category, IGP.

This came about from a passion and vocation which Vincenzo thought about patiently in order to create a wine that was characterized by personality and elegance.

It was a wine that forcefully expressed his own territory and brought out the best of those cliffs of tuff with a strong fossil presence. 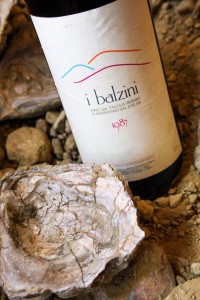 And thus, after much experimenting, and advised by maestro Giulio Gambelli, Vincenzo created I Balzini White label 1987.

It was a blend of sangiovese, Cabernet Sauvignon and canaiolo, matured in small Slavonia oak barrels, in 1991, four years from the ﬁrst harvest. The wine was born of a hot and humid summer, which nurtured it with a harmonious mix of sun and rain.

I Balzini White Label 1987 is the ﬁrst offering in a production chain that over the years has continuously renewed itself and diversiﬁed; all of this thanks to the will and audacity of Vincenzo, for whom it wasn’t enough to make a simple table wine.

We ﬁnd the same audacity in his wife, Antonella D’Isanto , who has been running the company for 10 years, and on March 6 has taken away the dust off 5,230 of those bottles, conserved for 30 years with care and attention, to allow visitors at the “Terre di Toscana” to try it at a tasting.

In Greve in Chianti three days dedicated … to bees