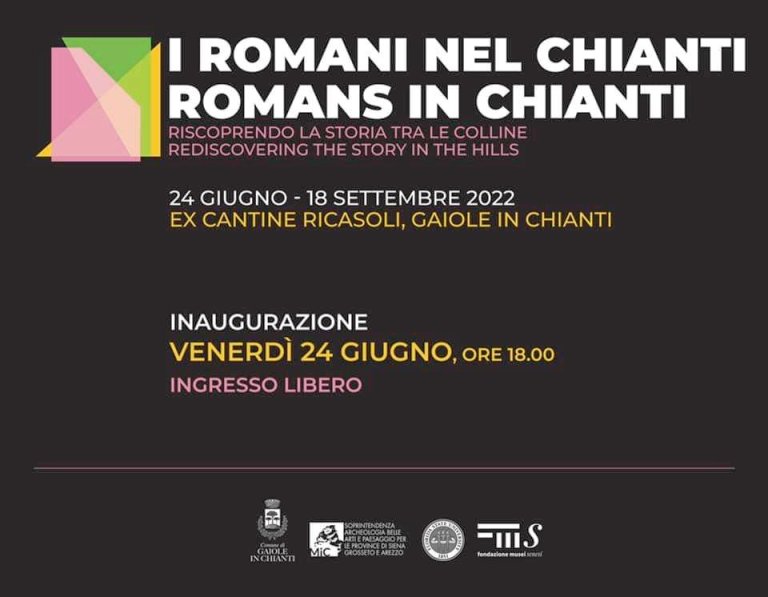 The beautiful exhibition entitled “Romans in Chianti” will be inaugurated on Friday 24 June, at 6 pm, in Gaiole in Chianti, at the former Cantine Ricasoli, which can be visited until 18 September.

The day after the inauguration, Saturday 25 June at 6 pm, Professor Lora Holland Goldthwaite, who has studied the treasure of coins in Cetamura, will give a public lecture that tells the story, entitled “The Story of a Roman Veteran and his money at Cetamura”.

From the treasure of silver coins found in Cetamura in 2015 to the materials collected in excavations and occasional recoveries, in an ideal path among the hills, the exhibition “The Romans of Chianti / Romans in Chianti” shows a picture of the population and itineraries in the Chianti of the Roman age.

Which tells us about the gradual passage from the Etruscan aristocracies to the farms of veterans and Roman colonists up to the large estates of the senatorial families of the empire.

Finally, the treasure of Cetamura returns “home”, a tangible sign of the path towards the realization of the Civic Museum At the Origins of Chianti, undertaken by the Municipality of Gaiole, in collaboration with the Superintendence of Archeology, Fine Arts and Landscape for the provinces of Siena, Grosseto and Arezzo and Florida State University which will soon open its doors in the halls of the former Ricasoli Cellars.

The fulcrum of the exhibition itinerary is Cetamura, which, unlike other fortified Etruscan settlements, continues to live in Roman times, but around this site materials from other significant Roman settlements in Chianti are gathered.

Such as the Roman villa of Monti in Chianti in Gaiole or the site of Petroio in Castelnuovo Berardenga, in addition to presences so far reported by small recoveries, useful for reconstructing the network of settlements and itineraries that innervate the Chianti hills.

In the Roman age, the Chianti area, squeezed between important centers such as Florentia (Florence), Faesulae (Fiesole), Saena Iulia (Siena) and Arretium (Arezzo), gradually took shape as an agricultural landscape in which the scattered house settlements dotted a widely spread countryside. exploited and cultivated: a rural settlement that remained stable for at least two centuries and which closely resembles today’s Chianti.

This process of reorganization of the political domination wanted by Rome and by the local aristocracy of Etruscan origin, carried out both in the cities and in the countryside of central-northern Etruria, contributes to the construction of a Roman identity by the local community in a process of assimilation to the culture and economy of the winners.

The exhibition will be open until 18 September during the opening hours of the tourist office: every day from Tuesday to Sunday, from 10 to 13 and from 15:30 to 18:30. Closed on Mondays. Free admission.