Christmas is a wonderful occasion to try a new recipe. We spoke about it with Tiziano Baldi, originally from Impruneta and now resident in San Casciano. Tiziano is not cook or a chef in a famous restaurant.

He is an artisan in one of the historic “fornaci” (terracotta furnaces) of Impruneta. If you have to ask what he knows about cooking, you probably aren’t familiar with “Peposo”. Don’t worry. Read this article and you will have the information you need.

“Peposo” is a typical dish from the tradition of Impruneta,” Tiziano tells us. “In fact it was born inside the furnace. The funaces were heated by wood and the ‘fornacini’ spent entire nights in front of the ovens to keep the ﬁre going”.

It is during these night time shifts that “il peposo” was born; a simple but ﬂavorful dish to help stand the cold and tiredness. It was cooked in terra-cotta pots at the mouth of the oven.

Legend has it that the architect, Filippo Brunelleschi, who personally went to check on the bricks that would be baked in the oven for his “dome” to make sure that they were perfect, often tasted the dish and loved it. 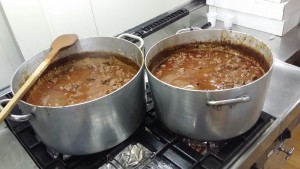 “Before I begin,” says Tiziano, “we should remember that there are two types of this recipe: the traditional one without tomatoes or tomato paste, the “white” recipe, and the one with tomato, the “red” recipe”.

Tiziano Is a veteran of peposo. He cooked it for the RAI 2 TV program, “Mezzogiorno in Famiglia” on Saturday and Sunday, December 10 and 11, and won the last edition of “Peposo Day”, the contest between Impruneta neighborhoods for the most ﬂavorful Peposo. The contest took place on Sunday, September 11.

The neighborhood of the “Fornaci”, where Tiziano learned the secrets of his recipe, beat the competition. They made Emilio Matteini’s traditional “white” recipe. Emilio’s nickname is “professor Cocchi”. He made the recipe famous many years ago, and here are its secrets. “Buon appetito!”.

INGREDIENTS: meat….beef muscle For EACH kilogram of meat: one head of garlic half a glass of red wine 5 gm of grated pepper 2 gm of peppercorns One kg of tomatoes for the “red” recipe.

PREPARATION: put everything in a deep pan and cook for an hour and a half for the white recipe and an hour for the red recipe Cooking time depends upon the quantity of meat, but the recipe usually takes from 2 1/2 to 4 hours.