In the central Piazza Brandi, in Marcialla (Barberino Tavarnelle) the curtain rises to kick off the fourth edition, awaited and desired after two years of forced silence, of the “Sagra dell’Aria bona”, scheduled from 2 to 31 July.

Names and titles of national quality and depth in the artistic and musical panorama will alternate in the roundabout of the 16 appointments that give shape to the review.

The initiative was born from the collaboration between the Giuseppe Verdi Marcialla Philharmonic, the Marcialla Cycling Union, the Circolo M.C.L., the District Council, the Marcialla cultural association, the Matteotti Trophy Committee and the ASD Marcialla City with the patronage and contribution of the Municipality of Barberino Tavarnelle.

There are many reasons why it is worth going to Marcialla: first of all the only date in Tuscany of the Sergio Caputo concert which will perform on July 16.

Of Roman origins, Caputo interprets the Italian song in a jazz and poetic key. He was one of the most popular singers at the three editions of the Sanremo Festival in which he participated and, after an American interlude that lasted several years, the artist proposed himself in various musical formations, placing jazz and Latin sounds at the center.

Among the appointments of the variegated carnet, the events of the theater in the square on 6, 8, and 17 July are worth mentioning.

The undisputed queen of the review is the music expressed in its many shades, from the theatrical musical project dedicated to Lucio Battisti with the participation of Chiara Savoi on July 15th, the “Monkey Shot” in concert on July 29, the “Sopron” in concert on the 30th July, the Verdi Philharmonic of Marcialla and the Puccini Philharmonic of San Gimignano on 9 July.

To culminate with the event that sees the popular tradition of Lisetta Lucchini as the protagonist of the last appointment scheduled for July 31st. Shows start at 21.30.

The world of sport will also be on stage with the fifth free-running cycling rally and self-managed rally “A wheel of Matteotti” on 10 July, the triangular air bona football tournament organized by ASD Marcialla City which will take place at the pitch sports club in Marcialla on 22 July at 8.30 pm and to follow the fun performances of the Bandaccia di Marcialla.

And again the appointment of 24 July with Ale’s friends, promoters of the “IV Remembering Day”, organized in memory of Alessandro Parrini, a young man who passed away a few years ago.

The initiative consists of a motorcycle rally, an aperitif, a lunch in the square for a day dedicated to friendship and solidarity.

The opening event of the billboard is held on Saturday 2 July at 9.30 pm at the concert by Alberto Mons – Fingerstyle Folksinger and on Sunday 3 July at 9.30 pm by the “Rough Diamonds X Marino Sax”.

During the evenings the food stands, bars and pizzeria of the party are open. All shows are free. 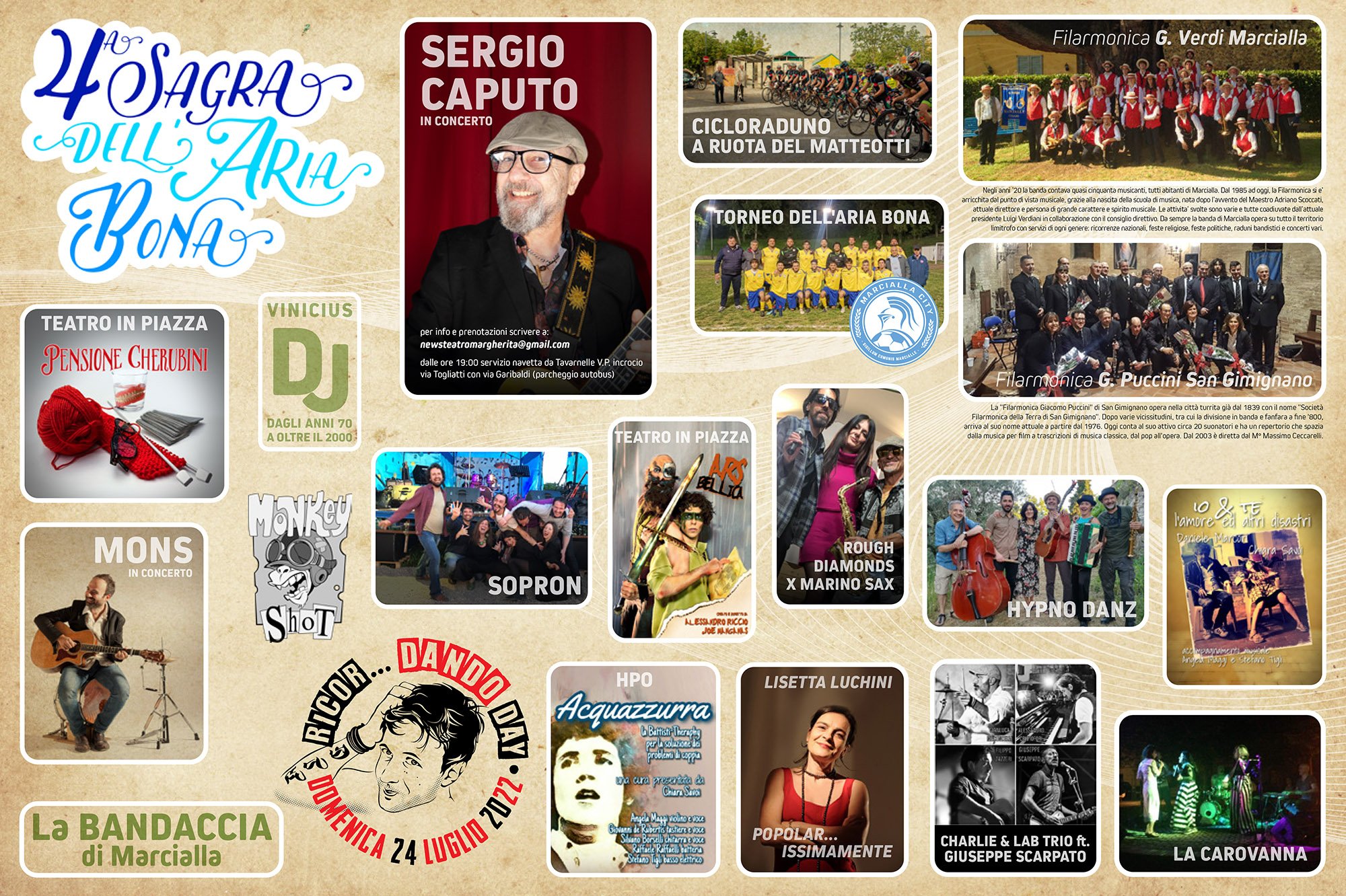