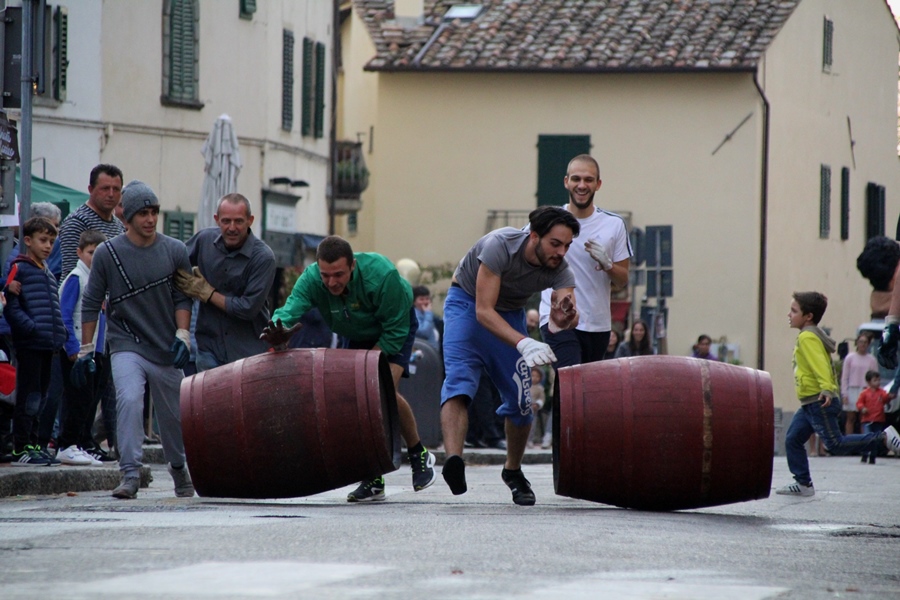 The spectacular "Carro di Bacco” parade, a wine barrel rolling race, "Wine Pong" and Tuscan "Street Food": in Mercatale everything is ready for the 43rd edition of the Festa della

The spectacular “Carro di Bacco” parade, a wine barrel rolling race, “Wine Pong” and Tuscan “Street Food”: in Mercatale everything is ready for the 43rd edition of the Festa della Vendemmia (Grape Harvest Festival), which will liven up the town on the 21st, 22nd and 23rd September.

This festival is organised as usual by the young volunteers of the Mercantiere town committee (in collaboration with local shop owners, the Fratres group of Mercatale, the Pro Loco and the Municipality of San Casciano). And this year they have drawn up a program full of events, music and plenty of fun.

The Festival starts on Friday 21st September in Piazza Vittorio Veneto at 4pm, with the Raffle (“Pesca a Premi“); from 7:30pm “Street Food” – open-air dinner at the MEC stand – and at 9:15pm the “Pissere, odissea di una parola fiorentina” theatre show by the company “Teatro Popolare d’Arte”, directed by Rosanna Gentili.

If you head to Piazza del Popolo, you’ll find “Giochi della Vendemmia” games for the little ones; from 7.30pm “AperiCena” at the bar and DJ set by Jack O Mino; 9pm “BeerPong SENIOR” tournament (to take part you must book at the bar stand) and at 9:30pm the “Ars Nova” music academy will stage the musical show “Violent Blend”.

On September 22nd lunch in Piazza Vittorio Veneto with “Street Food” organised by the local shop owners; at 4pm you can enjoy the photo exhibition “Un pomeriggio con la Protezione Civile” by the Civil Defense: they’ll also show their equipment, and stage a simulation of assistance intervention; at 5pm meet the Misericordia volunteers of Mercatale with “Che mondo sarebbe senza donatori” (“What a world would be without donors”); at 7:30pm alfresco dinner and from 8:30pm musical show with Alberto Mons.

In Piazza del Popolo from 4pm you’ll find more “Giochi della Vendemmia” for the children; at 6:30pm “Riciclamondo” show by the parents of the children from Mercatale kindergarten, with the direction of Paolo Ciotti; at 9pm the unmissable “Beer / Wine pong” tournament (to participate you have to register at the bar stand); gran finale at 10pm with animation and music by “Fools Animation” and DJ set.

On the festival’s last day, Sunday September 23rd, you’ll find plenty of events around the town. The day will start with the craft market at 10am; “Street Food” at lunchtime; from 4pm there will be a parade of the harvest wagon and performance of the street band “Altra Roba”.

The highly acclaimed Dr Why-Quiz team game in Piazza del Popolo at 9:30pm will round off the festival (for registration please contact the bar stand ).

“Everyone is invited to our festival, the more the merrier! – say Giulia and Massimo, two representatives of the Pro Loco of San Casciano – you’ll enjoy plenty of surprises, in addition to great wine and great food!”.