Thirty years have passed since the first edition of the Tignano Festival. It was the year 1988 when the Piazzetta del Castello was inaugurated, after the restoration works, and celebrated

Thirty years have passed since the first edition of the Tignano Festival. It was the year 1988 when the Piazzetta del Castello was inaugurated, after the restoration works, and celebrated with a great dinner and a concert by Tim Bryson Band.

This 31st edition pays tribute to Mahatma Gandhi, universally recognized as the icon of world pacifism, and dedicates the “Premio Incontro tra i Popoli” award to Valentino Giacomin and the “Ambiente” award to Professor Serge Latouche.

The 31st Tignano Festival per l’Ambiente e l’Incontro tra i Popoli (dedicated to the Environment and the Meeting between Peoples) is an initiative organized by the Comitato Tignano, with the support of the Unione Comunale del Chianti Fiorentino, the patronage of the Regione Toscana and the Metropolitan City of Florence.

The Festival will start on Sunday, July 1st at 9.30pm with a tribute to Mahatma Gandhi, 70 years after his death. The themes of world peace, environment, economy, spirituality, a holistic vision of man and society will be told by one of the leading experts, Giannozzo Pucci. 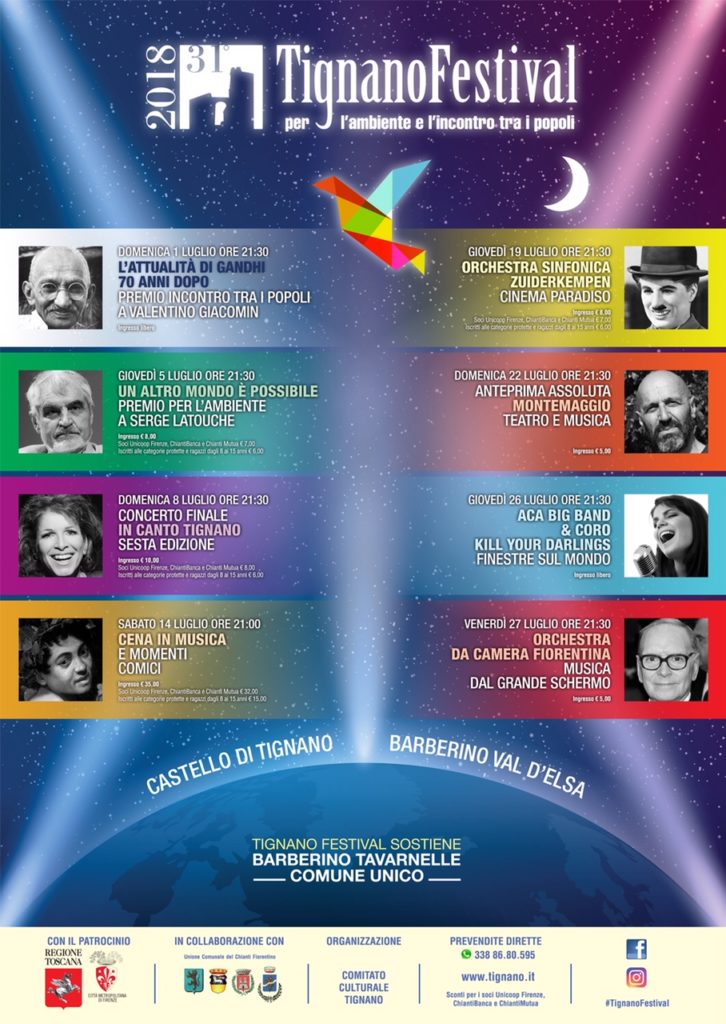 On the same evening, the Premio Incontro tra i Popoli award will be given to Valentino Giacomin, who has already been awarded by the Dalai Lama. He’s the founder of Alice Project for the development of a sustainable education and a culture of peace. Free admission.

On Thursday 5th July at 9.30pm the Premio Ambiente will go to the great French economist and philosopher Serge Latouche. Capitalism and wild globalization have distanced man from a hopeful happiness, while the environmental and social problems of our time seem to be the obvious side effects.

Latouche supports the idea of the liberation of society from the economy-based dimension and the recognition of diversity and dialogue.

On Sunday 8th July at 9.30pm final concert of the sixth edition of InCanto Tignano, the workshop dedicated to young opera singers from all over the world. Scenes and arias from the most popular operas by Verdi, Mozart and other masters. Artistic direction by Nicola Beller Carbone.

On Saturday, July 14th at 9pm – Dinner with music and comedy show. Dishes cooked with local products by the members of the committee under the guidance of their president, as well as chef for one night, Paolo Gianni. You’ll enjoy an evocative and unusual evening with the most suggestive music of the last decades. The comic gags are by Ruggero Trentanovi and Damiano Masini.

On Sunday, July 22nd at 9.30 “Montemaggio” theatre show – A re-enactment of the events of March 28th 1944 that led to the killing of the Porcareccia. The text is based on the story of the only survivor, Vittorio Meoni and the trial’s deeds. Massimo Salvianti is the author of the text and the narrator. Emiliano Benassai on the accordion and Angela Tempestini on the violin. Drawings by Lorenzo Bojola.

On Thursday, July 26th at 9.30pm the Aca Big Band from Belgium and the choir “Kill your darlings” will perform gospel, soul and contemporary pop music.

Two group from the musical academies of Beringen and Merksem in Flanders. The choir is conducted by Inge Minten, a teacher at the Royal Conservatories in Antwerp and Brussels. The ACA Big Band, conducted by Bert Minten, plays the traditional music of the big bands of Count Basie and Duke Ellington, as well as fusion and funk music by composers such as Bob Mintzer, Chick Corea and Stevie Wonder. Free admission.

On 27th July at 9.30pm the Orchestra da Camera Fiorentina will perform “Music from the big screen”. The orchestra has performed in over 1.350 concerts, for RAI and the most important international networks. Critics have called it “one of the best European chamber orchestras”.