20giuTutto il giorno31ago“Estate di San Francesco”: a great open-air theatre to enjoy this Summer in Greve in ChiantiGreve in C. 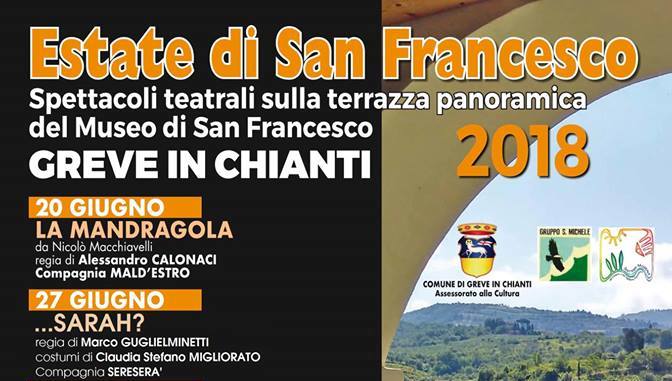 Theatre with a breathtaking view in Greve in Chianti. The terrace of the San Francesco Museum is the stage that the Municipality of Greve in Chianti has chosen once again this

Theatre with a breathtaking view in Greve in Chianti.

The terrace of the San Francesco Museum is the stage that the Municipality of Greve in Chianti has chosen once again this summer for a interesting calendar of outdoor theatre performances.

The Chianti territory has a rich artistic heritage, as the collection of this museum shows: Etruscan finds, sacred art treasures, Medieval and Renaissance masterpieces.

And now there’s something more to enjoy, the art of theatre brought to life by Tuscan theatre companies that participate in the “Estate di San Francesco”.

This is a special occasion to experience Greve in Chianti in the evening, combining a visit to the museum with a theatre show.

The Municipality multiplies its cultural offerings by staging nine shows from 20th June to 29th August, in which classics such as Machiavelli, Molière and Curzio Malaparte go side by side with works by contemporary playwrights, including Ugo Chiti, Neil Simon and vernacular performances.

The overture is entrusted on June 20th to “La Mandragola”, the cornerstone of Niccolò Machiavelli’s production directed by Alessandro Calonaci, presented by the Compagnia Mald’estro.

On June 27th the spotlights will be on “Questi sconosciuti”, loosely based on the film by Paolo Genovese directed by Maria Paola Sacchetti. The company that presents the show is “I giardini dell’arte”. 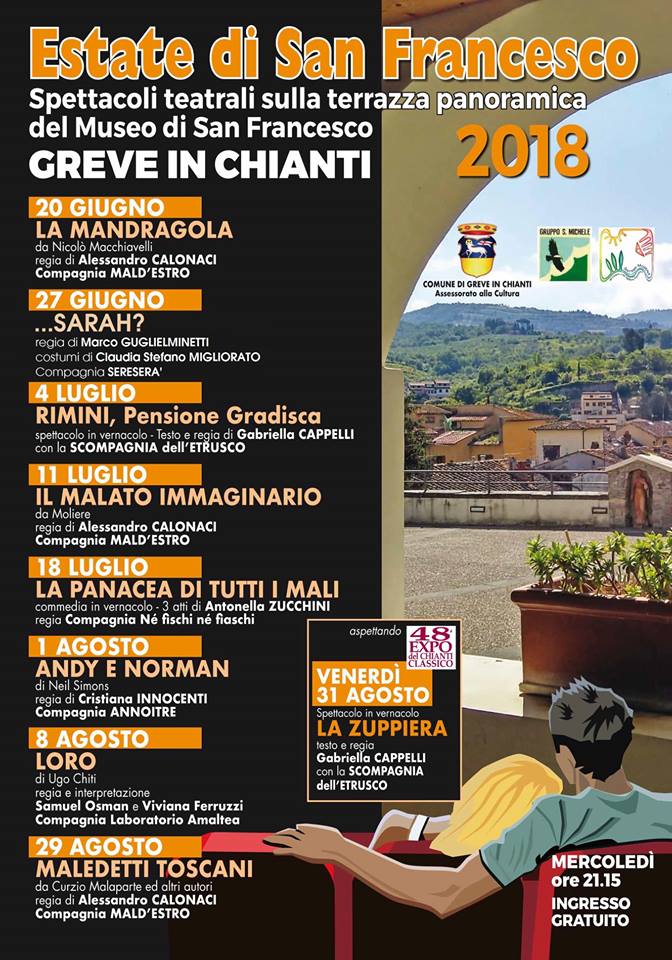 “Rimini, Pensione Gradisca” is the vernacular performance of the Scompagnia dell’Etrusco, written and directed by Gabriella Cappelli, scheduled for July 4th.

On July 11th the company Mald’estro is back with “Il malato immaginario” by Molière directed by Alessandro Calonaci – on the 18th the three acts vernacular comedy “La panace di tutti i mali” by Antonella Zucchini, curated by the theatre company Né fischi né fiaschi.

In August, four unmissable dates – On 1st August a re-elaboration of “Andy and Norman” by Neil Simon directed by Cristina Innocenti and interpreted Annoitre theatre company.

On August 8th a Tuscan playwright and director of national standing is on stage: Ugo Chiti with his “Loro”, in the staging of Samuel Osman, Viviana Ferruzzi and Laboratorio Amaltea.

The last appointment is on 31st August, with “La Zuppiera” by Gabriella Cappelli. The vernacular performance of the Scompagnia dell’Etrusco closes the open-air theatre summer program with typical Tuscan wit and irony.