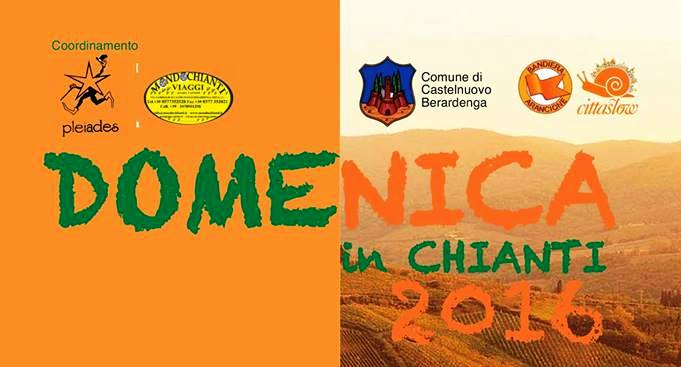 Next Sunday, July 24, “Domeniche nel Chianti” (“Sundays in Chianti”), will begin. A guide will take you on themed walks through the territory of Castelnuovo Berardenga and then to a winery for a tasting.

Excursion to the ruins of the Castle of Cerretaccio, in existence since 1097 and contested between Sienese and Florentines. You can still admire the tower which was knocked down by the Sienese in the 16th century. Then comes a visit to the rectory of Cerreto, abbey dating to around the year 1000.

From the 1400’s it belonged to the Cerretani family and was passed to the Siena Curia in the 1700’s, when the inside of the church was restored in the period style and the rooms were frescoed by Sienese artists.

The visit ends in the wine cellar with the tasting of three wines (Chianti Classico, Chianti Classico Reserve, and “Rosso Toscano IGT) at the Canonica Winery of Cerreto, whose vineyards extend for 21 hectares in the southern part of the Chianti Classico territory. Meeting time is 9am at the winery; departure at 9:15am (approx. 3 hours)

Walk through the Geggiano forest in search of shelters from WWll. You will be accompanied by a witness of the period, who will tell about farm life experiences of the time.  Arrival at the “Cantina Sociale of Geggiano” (the Wine Cooperative), which makes wine from grapes brought to them by their members.

There will be the tasting of 3 wines (White Vermentino, Chianti Classico and Chianti of the Colli Senesi); the antique stone and brick structure originally belonged to the Villa Bianchi Bandinelli and was then donated to the serfs of the farm of Count Ranuccio Bianchi Bandinelli, who joined the serfs and created an agricultural cooperative. Meeting time is 9:15am at the parking lot of the “Bosco di Geggiano” (Geggiano forest). Departure at 9:30am (approx. 3 hours)

Visit to the”Vitiarium di Agricola” San Felice, an experimental vineyard which attempts to save and give value to ancient native Tuscan vines, in collaboration with the University of Florence.

The University is conducting research on the genetic patrimony of our vines. It will be followed by an introduction to the history of the winery and a visit to the cellar, with the tasting of two wines, Chianti Classico 2013 and Pugnitello 2011, one of the vines rediscovered through the research of the Vitarium.

There will also be a bread and local extra virgin olive oil tasting. Meeting at 10am at the Enoteca of San Felice (approx. 50 minutes).