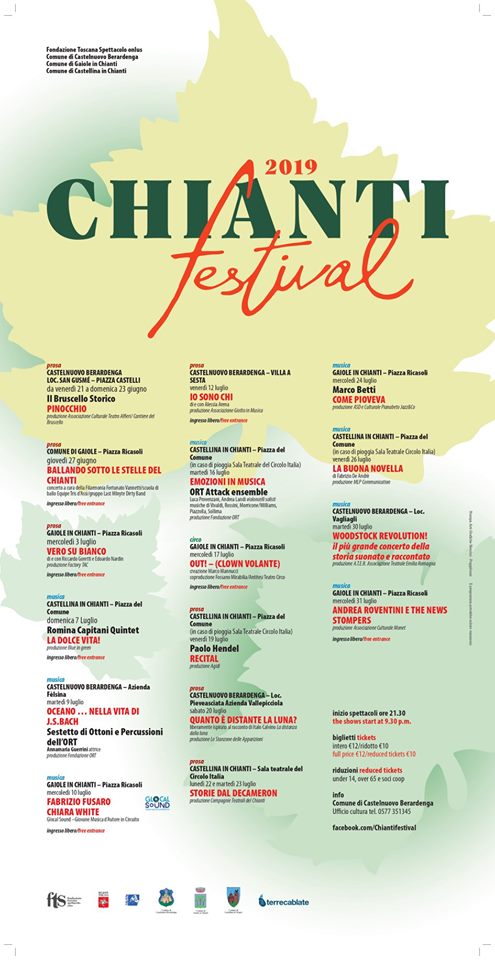 "Chianti Festival" time! This summer the Chianti Classico towns will delight their visitors with a rich program of live shows. Castelnuovo Berardenga, Gaiole in Chianti and Castellina in Chianti will be

“Chianti Festival” time! This summer the Chianti Classico towns will delight their visitors with a rich program of live shows.

Castelnuovo Berardenga, Gaiole in Chianti and Castellina in Chianti will be the scenic settings of a series of events that will enliven their squares, villas and local businesses throughout the months of June and July.

Theatre shows, concerts and contemporary circus exhibitions will bring originality and fun to the Chianti and entertain locals and tourists who come here to enjoy this beautiful region.

The program includes shows by local and Italian artists and theatre companies, in addition to the usual and unmissable Bruscello Storico, a form of Tuscan folk theatre that has a long-standing tradition.

➡️ As per tradition, the Bruscello Storico opens the season with a folk theatre show that reinterprets works from great Italian literature.

The 2019 edition brings to the stage one of the most famous Italian novels for children, “Pinocchio”. In Castelnuovo Berardenga, in piazza Castelli (San Gusmé), from Friday 21st to Sunday 23rd June, the inhabitants of this charming town set among the rolling Sienese hills give life to the characters of Carlo Collodi’s masterpiece.

➡️ Riccardo Goretti and Edoardo Nardin will bring all the magic of creativity to Gaiole in Chianti on the evening of Wednesday 3rd July.

The stage, set up in Piazza Ricasoli, will be turned into a painter’s studio where Goretti’s narrative – excerpts from novels, poems, annotations – will be interpreted by Nardin on large painting sheets.

Their impromptu exhibition “Vero su Bianco” (“True on White”) which mixes words and drawing, is an attempt to unite two artistic worlds, with the participation of the public. Free admission.

The idea was born from a survey carried out in some of the local retirement homes and the show is written and performed by Alessia Arena (based on an original text by Valerio Nardoni, directed by Matteo Marsan).

It translates the experiences of the elderly into a theatrical-musical form, showing the relationship between identity and one’s own physical body.

The show focuses on the moment in which a person enters a nursing home and strips himself of his environment, remaining with a single identifying element: his own body; hence the statement: “Io sono Chi” (“Who I am”). Free admission.

➡️ Paolo Hendel‘s biting satire is the protagonist of the evening of Friday 19th July in the Piazza del Comune of Castellina in Chianti.

The recital of the Florentine comedian and actor combines repertoire pieces with some recent ones inspired by current events. Multi-instrumentalist musician Alessandro Bruno will provide a counterpoint to the monologue.

Narrator: Matteo Marsan, with the Teatro Alfieri theatre company and Le Calcinaie association; the soundtrack is by Giacomo Rossi; choreographies by Stella Peccianti; directed by Daniela Morozzi. The show is hosted by the Azienda Vallepicciola in Pieveasciata, near Castelnuovo Berardenga.

➡️ “Storie dal Decameron” is inspired by Certaldo-born writer Boccaccio: his Novellas are revisited by Matteo Marsan, who coordinates the theatre companies of the Chianti area.

This performance focuses on the commoners’ world, illustrating ‘comic’ themes such as pranks, amorous intrigue and adventure.

On Thursday 27th June the Filarmonica Fortunato Vannetti presents an evening that celebrates the bond between the arts of music and dance – setting: Piazza Ricasoli in Gaiole in Chianti.

“Ballando sotto le stelle del Chianti” (“Dancing under the stars of Chianti”) is the title and the theme of this show that presents the best of this historic musical institution, much loved in Gaiole, where it was founded way back in 1865. On stage the dance school Equipe Tris d’Assi/Last Minyte Dirty Band group. Free admission.

A selection of world-famous songs linked to the “Dolce Vita”, the image that Italy had between the end of the Fifties and the beginning of the Sixties: ‘Amado mio’, ‘Buonasera signorina’, ‘Mambo italiano’, “Guarda che luna” and many others. Free admission.

The Brass and Percussion Sextet of the ORT – together with the actress Annamaria Guerrini – gives an overview of the Bach compositions, narrating fourteen characters, to delineate the profile of the great German composer.

➡️ On Tuesday, July 16th, in Piazza del Comune of Castellina in Chianti, there’s another performance of the Orchestra Regionale della Toscana: the “Ort Attack Ensemble”. A lively and energetic performance, born from an idea of ​​the first cello Luca Provenzani.

➡️ “Come pioveva” is a theatrical-musical journey back to 1938-1942 Italy, the years of the vocal group Trio Lescano. On Wednesday 24th July in Piazza Ricasoli in Gaiole in Chianti, Marco Betti narrates chronicles, anecdotes and biographical traits of musical authors of that time; on stage he’s accompanied by Diana “Crêpe” Crepaz and her trio, and by Luciano Guarino on guitar.

At almost fifty years old, the album ‘La Buona Novella’ by Fabrizio De André returns to the stage, reinterpreted by the talented Khorakhanè and Chiara Riondino, in a vibrant tribute to the Italian singer-songwriter-poet. The other soloist voice is by Fabrizio Coveri, while the arrangements and musical direction are by Fabio Battistelli.

➡️ “Woodstock Revolution!” will be on stage in Castelnuovo Berardenga (Vagliagli area), on Tuesday 30th July: a show dedicated to music born from the collaboration between the musician Enzo Pietropaoli and journalists Ernesto Assante and Gino Castaldo.

On one hand there’s the music by Pietropaoli, which reinterprets the most significant notes of the 1969 musical festival in a contemporary key; from the other Ernesto Assante, prestigious music critic and journalist, opens the “lesson concert” commenting songs, videos, and testimonies of that historical concert.

➡️ The last musical event is on Wednesday, July 31st, in Piazza Ricasoli, Gaiole In Chianti, with Andrea Roventini and The News Stompers. The artists reproduce the styles of traditional New Orleans jazz, with an eye on the great masters of the past. Free admission.

➡️ This year the contemporary circus presents the acrobatic feats of Marco Mannucci and Massimiliano Ferrari.

“OUT! (the flying clown)” is a show that fascinates adults and children alike: performances of vertical dance, irony and poetry are the strengths of a clumsy and tragic clown, who doesn’t lose his optimism and captures the attention of the public with his tenderness. An evening celebrating Italian melodrama accompanied by the most beautiful voices of the “bel canto” of the Thirties.