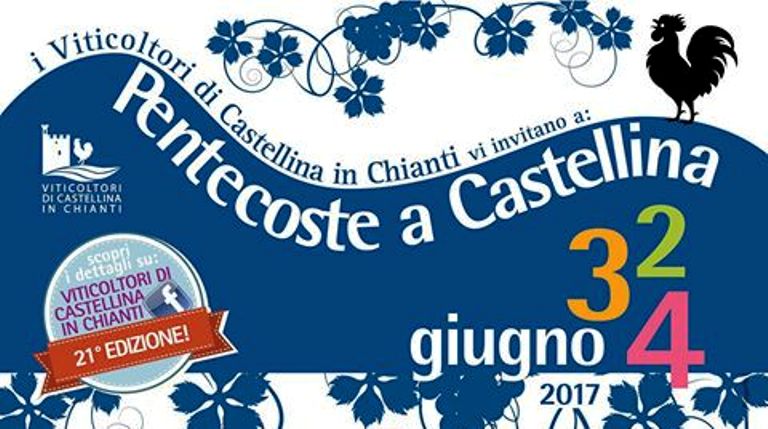 From Friday, June 2, to Sunday, June 4, Castellina in Chianti renews its appointment with “Pentecost in Castellina”, three days of tradition and territory excellence, starting with wine.

The event is in its 21st edition and is promoted by the Winegrowers’ Association of Castellina in Chianti with the contribution of the town administration, in collaboration with the Association, “Amo Castellina”, the Consortium of Chianti Classico wine and the local Philharmonic. The medieval walk of Via delle Volte will be the center of the event, when “A Cena con il Classico” opens at 8 PM.

The event is open to the public. Reservations are required. Information at 0577-741392 or ufficioturistico@comune.castellina.si.it.

The menu is offered by the restaurant, Albergaccio di Castellina in Chianti, and will be accompanied by local wines provided by the Winegrowers’ Association of Castellina.

On Saturday, there will also be a tasting point in Piazza del Comune, starting at 7 PM.

The three day wine program will be enriched by the notes of the Philharmonic of Castellina in Chianti, which will present a concert in the Chiesa del Santissimo Salvatore on Friday, June 2, at 9 PM.

In the afternoon of Sunday, June 4, starting at 5 PM, the orchestra will parade along the streets of the town with other bands in order to celebrate the Pentecost with the event, “Musica e…”.

Artisans and artists will complete the appointment with a market, exposition, and performance in the town on Friday to Sunday from 9 AM to 10 PM in town, in Piazza del Comune and in the Parco delle Casce.

The “Gimkana di Pentecoste”, mountain bike trail for children from 6 to 13, will cross the town and return to the starting point for a “merenda” based on local flavors on Friday, June 2, at 3 PM: bread and olive oil offered by the Winegrowers of Castellina in Chianti.

On Saturday, June 3, at 5 PM, the Casa Dei Progetti will host a round table on the theme: “Chianti: agrarian/food certainty in the territory for locals” Alessio Brogi, Colonel of the “Carabinieri Forestali di Siena” will preside.

In the Piazza del Comune at 7 PM, the Concerto Legacy Trio with Daniele Chiantese on drums, will perform; Dario Zeno is at the piano and Andrea Rosatelli is on the bass.

The Museo Archeologico del Chianti Senese will join in. It will be open on Saturday, June 3, from 10 AM to 7 PM, and will add, free of charge, an opening from 9 PM to 11 PM. On Sunday, June 4, the museum proposes a guided tour named “Il tumulo etrusco di Montecalvario: scoperte, riscoperte e spoliazioni”, starting at 5 PM.

The tour will reach the Etruscan tomb at the entrance to Castellina. For info: 0577-742090 or info@museoarcheologicochianti.it.