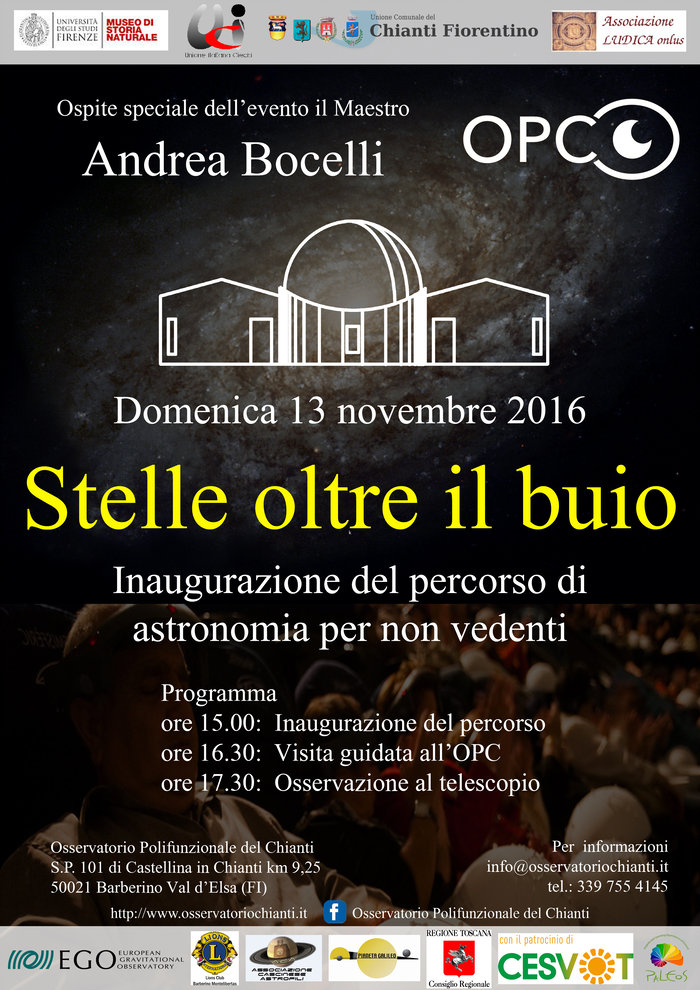 Articolo disponibile anche in: ItalianIn the Chianti hills, under the dome of the polyfunctional

In the Chianti hills, under the dome of the polyfunctional Observatory of Barberino Val d’Elsa, a telescope faces the sky and lights up inﬁnity.

It is a simple gesture, accessible to everybody; to listen to the stars and share the unlimited music of the universe. The sounds of the sun and planets announce their presence and enable the earth to be part of a never-ending and mysterious voyage.

And so, the Observatory of Chianti Fiorentino opens the doors of astronomy to the disabled by launching a multi-sensory experience aimed at knocking down physical and social barriers.

It is a challenge that sees through the dark and leads the visually impaired on a voyage of knowledge and scientiﬁc research, fostered by the passion of a team of astronomers, experts, and hundreds of volunteers from the Chianti region.

To get to know the sky through “special eyes”, to hear sounds of celestial bodies emanate through radio signals of the cosmos, to touch three dimensional objects, materials and models of planets; to project oneself into the universe through an itinerary planned and created to answer the needs of non-seeing visitors.

The Observatory, together with an exceptional guest of honor, Andrea Bocelli, and with the patronage of the town Union of Chianti Fiorentino, will inaugurate an astronomic voyage for nonseeing visitors on Sunday, November 13, at 3 PM.

After three years of planning, the project, “Stelle Oltre il Buio” (Stars beyond the Darkness), is ready. The project was curated by Emanuele Pace, scientist of the observatory, Gianni Paoli and Brigida Cirillo.

The project is made up of tactile structures and 3-D planets and offers the possibility of listening to sounds emanating from the planets through direct access to the data Bank of NASA.

Illustrating the voyage is the scientiﬁc coordinator, Emanuele Pace: “Our planned objective”, explains Pace, of the department of physics and astronomy of the University of Florence, “was to make known the objects of the universe known, what they are made of and how they are organized in the sky. For this scope, we created two series of three dimensional planet models of the solar system. The ﬁrst shows the dimensions of the planets in scale, the second shows the characteristics of the surfaces. Another panel demonstrates the orbits of the planets in scale and in relief to illustrate the distance of the planets from the sun. This information is discovered through touch. After the tactile experience, the itinerary continues in the dome where you can become familiar with the telescope by touching it, and you can understand how it works as it moves and points towards the celestial body. Once arrived, instead of seeing it, you can hear it”.

The project was inaugurated by the great Margherita Hack. The polyfunctional observatory of Chianti Fiorentino belongs to the town Union of Chiant Fiorentino and was created thanks to the group, “Astroﬁli del Borghetto” from the towns of Barberino Val d’Elsa and Tavarnelle Val di Pesa, with an investment of circa €400,000, and the support of the Lions Club, Montelibertas, of  Barberino.

“The project”, comment the mayors, Giacomo Trentanovi and David Baroncelli,” unites cultural objects and scientiﬁc information for social and tourist purposes and the promotion of the territory. A main goal is its opening towards the territory, particularly, and involving the school system through guided workshops and descriptive itineraries, both inside and outside in the botanical park of Chianti which surrounds the structure. An added value of the project is to bring science to those who have multimedia barriers. By sharing, we can obtain comprehension, not only of science but of disabilities, and we can overcome them together”.

The project, “Stelle oltre il buio” created by the Unione Italiana Ciechi (Italian union of the blind) and by the Association, Ludica onlus, is ﬁnanced by the program, Pianeta Galileo of the regional Council of Tuscany, by Cesvot, (with projects of innovation andl training) and by the Lions Club of Barberino.

To create the project, modern techniques of tridimensional printing were used. The were offered by the Paleos society, a Florentine laboratory made up of young paleontologists, engineers, and naturalists, who used the models published by NASA,  and by the work of NASA astrophysicists who allowed the radio signals from planets, from the sun and from other objects in the universe to be converted into sounds.

The initiative also covers training ﬁnanced by Cesvot and offered to volunteers, to help train them to transmit scientiﬁc concepts to the nonseeing. For the inauguration, some objects and tactile 3D panels created by Paleo or offered by the Astroﬁli Cascinesi and the Consortium Ego, who manages the Virgo experiment, Onde Gravitazionali, at Cascina, will be shown. A work of art created by the artists Leopoldo Terreni and Domenico Antonacci and dedicated to the non-seeing will also be presented.