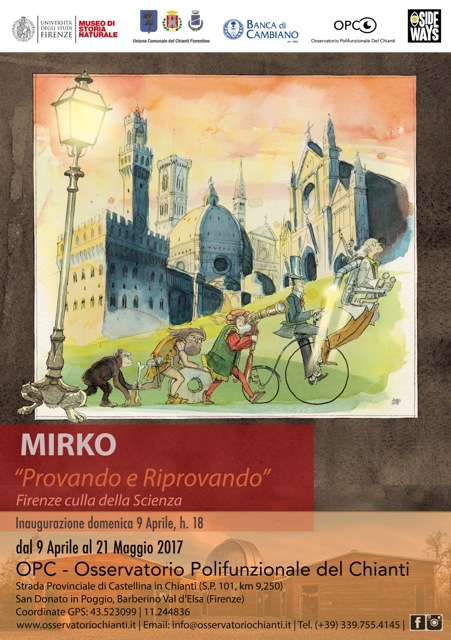 Articolo disponibile anche in: ItalianOn Sunday, April 9, at 6 PM, the show by

On Sunday, April 9, at 6 PM, the show by Franco Filippi, alias MIRKO, begins at the Polyfunctional Observatory of Chianti.

It is entitled “Provando e riprovando-Firenze culla della Scienza” (trying and retrying–Florence as the cradle of science).

The show will carry a series of watercolors which evoke the life and discoveries of some of the most important sciences who have tied their names to the city of Florence.

There will be portraits of famous scientists, from Leonardo da Vinci to Enrico Fermi, from Galileo to Marconi, as well as some lesser-known scientists, important for their contribution to Scientiﬁc progress, technology and society.

“Provando e riprovando” is one of the expressions dear to modern science. It gives the idea of how long and difﬁcult is the path towards general theory or a scientiﬁc discovery.

“Riprovare”, in the double meaning of trying again and throwing away or criticizing and confuting- synthesizes the rigorous attitude that the modern scientist, from Galileo on, had to adopt.

MIRKO’s work is fruit of a careful and thought out study, the results of accurate research and historic and iconographic documentation.

The 16 portraits of these illustrious men are ulterior representations of the culminating moments of their research and are accompanied by the scientiﬁc instruments of their epic and the inventions and discoveries with which they revolutionized thought, thus advancing human knowledge.

The able characteristic of the cartoonist, together with an eye for detail and delicate chromatic combination, render Mirko’s work real illustrated biographies of great communicative efﬁcacy, accessible to all ages.

The design and watercolors of MIRKO are collected in a prestigious book, “Firenze, passeggiate nella scienza”, published by Vanzi Editore.

The exhibit can be visited starting on May 21.