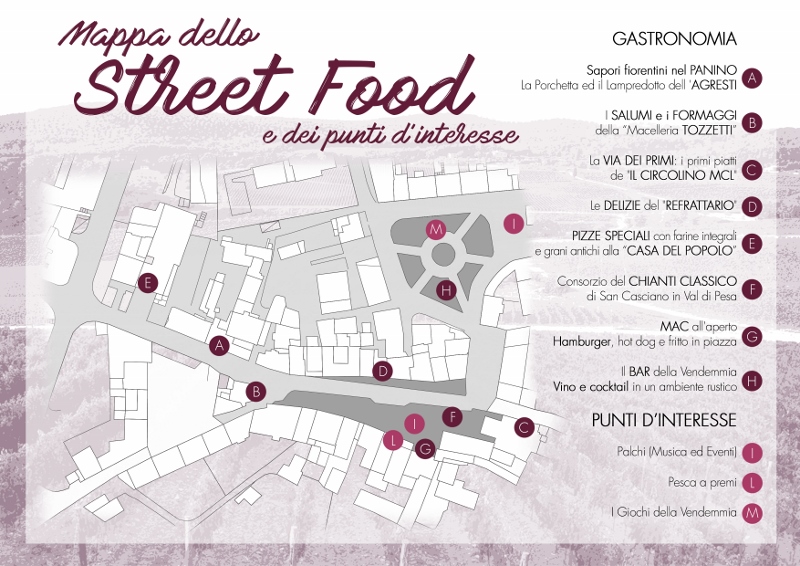 Everything is almost ready. The traditional Vendemmia Festival in Mercatale is about to start. The whole town will celebrate this year’s grape harvest on September 22nd, 23rd and 24th.

This 42nd edition will be full of surprises. This year the festival will be in fact organized by the Mercantiere Committee (in collaboration with the Fratres group of Mercatale, the Pro Loco and the Municipality of San Casciano), a group of young volunteers (as young as sixteen years old).

In collaboration with the town’s shop owners, they will set up some “zero-mileage Street Food” stalls and fashion shows in the streets and squares of Mercatale, which will be accompanied by live music and concerts.

The festival will begin on Friday 22nd at 4pm, with the children’s games in Piazza del Popolo; followed by “AperiCENA Hippie” at the bar stall from 7:30pm, and at 8:30pm the S-Chianti’s concert (this local band has gone viral on the web for their “È bollito”, parody of the song “Despacito”).

At 9pm the play “Midsummer Night’s Dream” will be put on (starring the actors of the company ““Eroi necessari”); at 9:30pm “Wine Pong” (couples will play to win a wine tasting at the Antinori Winery) and “Cola Pong” for the kids; the evening will end with Mino Dj and D&J Brothers music in Piazza del Popolo, from 9:30pm.

On Saturday 23rd the entertainment will start as scheduled at 12pm (but the stalls will be open from 10am) with the “Street Food” lunch organised along the town’s streets; at 4pm there will be “Sport e Vendemmia”, where children and young people will be invited to try judo lessons, rhythmic gymnastics, basketball, cycling, skating, football and running in piazza del Popolo and Piazza Vittorio Veneto; later on, before the “Street Food” dinner, at 6:30pm the aperitif of the contrada will be served at the bar stall ; from 8:30pm acoustic Concert with Live Music in Piazza Vittorio Veneto and from 9:30pm “Mercatale in Passerella” (fashion and hair stylist show).

Sunday 24th is the last day of the festival. As a grand finale, the artisan market will start at 10am; “Street Food” at lunchtime; from 4pm there will be a parade of the grape harvest wagon and in Piazza del Popolo the concert of the band Archimossi from Certaldo; at 17pm the typical ‘corsa delle botti’ (barrels racing); at 6:30pm “Aperitivo Cowboy” at the bar (with hay bales and volunteers dressed in Texan style); then live music before the “Street Food” dinner in Piazza del Popolo.

The evening will end with the very popular Dr Why-Quiz team game (register at the Bar stand), starting at 9:30pm.

We’ve spoken to Lisa and Giulia, two volunteers from the committee: “This year’s festival is entirely innovative, and it will help everyone appreciate the tradition of the grape harvest even more!”.

This is the volunteers team’s goal. Not to be missed!