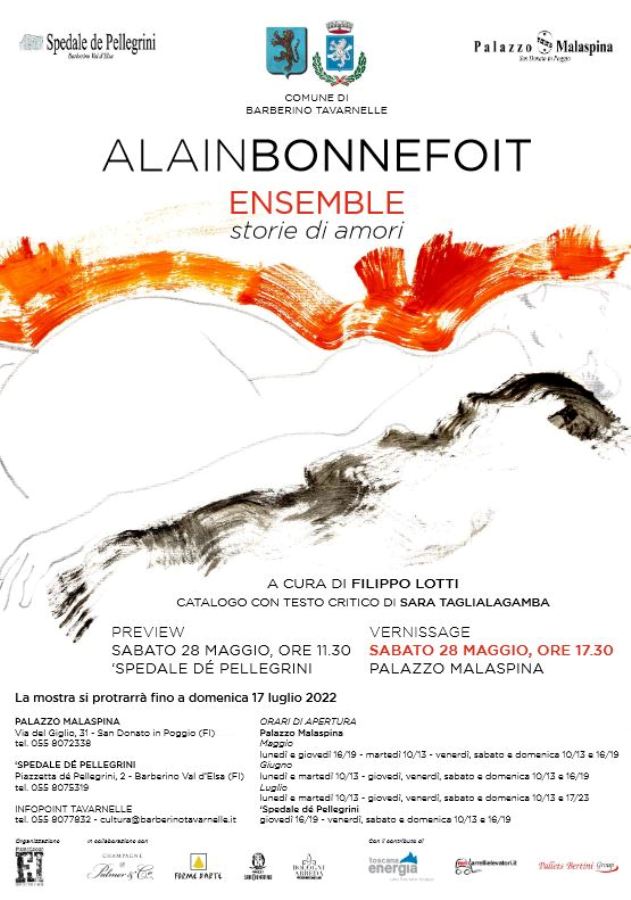 Articolo disponibile anche in: ItalianLove is not a privilege of a few. With the solo

Love is not a privilege of a few.

With the solo show “Ensemble. Love stories”, the French artist Alain Bonnefoit, who has lived in the vineyards of the mythical city of Semifonte since the 1960s, makes his artistic baptism official in the Barberino Tavarnelle area.

There are about sixty masterpieces, many of which unpublished, depicting female nudes, which the multifaceted master of Montmartre, painter, sculptor, engraver, one of the most representative artists of the École des Beaux Arts in Paris, will exhibit for the first time in the halls of the Spedale dei Pellegrini, in the castle of Barberino Val d’Elsa, and those of Palazzo Malaspina, in the village of San Donato in Poggio.

The new staging, the flagship event of the artistic season promoted and organized by the Municipality of Barberino Tavarnelle, will open the doors of the ancient Palazzo Malaspina on Saturday 28 May at 5.30 pm, where the ribbon cutting is scheduled with the mayor David Baroncelli and the councilor to the culture Marina Baretta, at Palazzo Malaspina.

And it will remain open until July 17 in the double institutional headquarters.

The personal exhibition of Bonnefoit is the homage that the municipal administration dedicates to one of the most significant personalities of the contemporary art scene with the exhibition of a heterogeneous collection that includes oil paintings, lithographs, original engravings, sumi-e and sculptures, created over the past ten years.

Bonnefoit, whose teacher was Antoniucci Volti, a pupil of Auguste Rodin, is one of the few artists in the world who works using ink painting, according to the techniques and expressive modalities of sumi-e, a Japanese art particularly dear to the artist.

Curated by Filippo Lotti, the exhibition offers a summa of the open, inclusive spirit of Bonnefoit, linked and attracted by the harmony and quality of the environmental, social and food and wine context of Chianti and Valdelsa that inspires the sweet and sinuous forms of her feminine creations .

The common thread running through Bonnefoit’s works is the female nude.

The women that the master, at the age of 85, continues to depict in different techniques, painting them, sculpting them, engraving them, are all portrayed live.

Hers is an iconography of a femme couchée that draws inspiration from nineteenth-century French painting and from the artists who have ventured into this subject such as, just to name a few, Matisse, Manet, Bonnard, Courbet, Renoir, Cambon, Millet and from Italian Modigliani.

The art of Bonnefoit is a path in which everyone can identify themselves to measure themselves with their abilities, enrich themselves with experiences and opportunities with which to learn, research, improve, confront, act as protagonists in the challenges of the present.