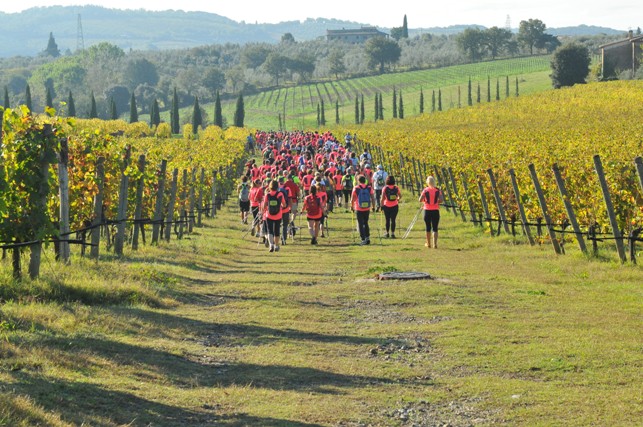 Articolo disponibile anche in: ItalianThe Ecomaratona del Chianti is the event where sport and

The Ecomaratona del Chianti is the event where sport and promotion of the territory come together. What makes this running event truly unique is the beautiful setting, the landscape of the Chianti Classico’s hills and vineyards.

The date is scheduled for Sunday October 15th for the 42 kms. marathon, plus some shorter routes of 21 and 13 kms., and the Staffetta 5×1200 meters. There will also be some non-competitive events starting from Friday 13th October, including the ‘Ecopasseggiata’ (nature walk), the Nordic Walking trail and a walk that leads you on a journey through the cellars of the area.

Thousands of people will take part in these events, and everybody will have the opportunity to exercise and at the same time to enjoy and appreciate the Chianti’s scenic landscapes and the excellent local food and wine.

The first EcoMaratona del Chianti was held in 2006 with the aim of promoting and enhancing the landscapes, the food and wine heritage and traditions of Siena’s territory with a racing event that drew more than 5000 participants.

Thanks to the collaboration with the Municipalities of Castelnuovo Berardenga and Gaiole in Chianti, the marathon’s route has been expanded and enriched with the scenic departure from the Castello di Brolio, a symbol of the famous Chianti Classico. It finishes after 42 kms. in Castelnuovo Berardenga’s town centre.

The beauty of the route, that passes through woods, vineyards, and unpaved country roads has made these event very popular with athletes and many sport and nature lovers. On Sunday 15th October the scheduled events are: EcoMaratona del Chianti (42 kms.), the Chianti Classico Trail (21 kms.) and the Trail del Luca (13 kms.).

Competitive routes include the Staffetta EcoChianti 5×1200 meters, scheduled on Friday 13th October at 6pm in the area around Castelnuovo Berardenga.

Three events are non competitive: the Nordic Walking (10 kms.), which on Saturday, October 14th will touch different areas of Castelnuovo Berardenga’s territory; “Passeggiando per cantine” (8 kms.) on Saturday, October 14th, with a food and wine tasting tour around the Chianti, combined with guided tours of villas and castles, as well as lunches and dinners in enoteche, wine cellars and restaurants of the area; the Ecopasseggiata (10 kms) scheduled for Sunday 15th October, that you can sign up to on the same morning

Over the course of these events, Castelnuovo Berardenga will host a fair to promote the excellent local products, from Chianti wine to Pecorino cheese from the Crete Senesi, salumi (cured pork meat) and honey.

70% of the participants come from other regions in Italy, and this confirm the national importance of the Ecomaratona. The percentage of women has risen to 33%, from last year’s 29%.

In 2016, for the edition which celebrated 300 years of the Consorzio Chianti Classico, almost 600 participants came from abroad, representing over 20 countries.

The EcoMaratona del Chianti has environmental protection at heart and adheres to the international campaign “Io non getto i miei rifiuti” (“I don’t throw away my waste”). At the refreshment points, biodegradable glasses will be used, and at the end of the race, a cleaning team will follow behind the last running, ensuring the countryside is left in a pristine state.

The event is also part of the Circuito EcoMaratone of Italy that, together with the Sahara Marathon, aims to help the Saharawi refugees with medicines and clothing. Furthermore it gives economic support to twelve families living in a refugee camp, through the sale of medals offered to the participants of the event.