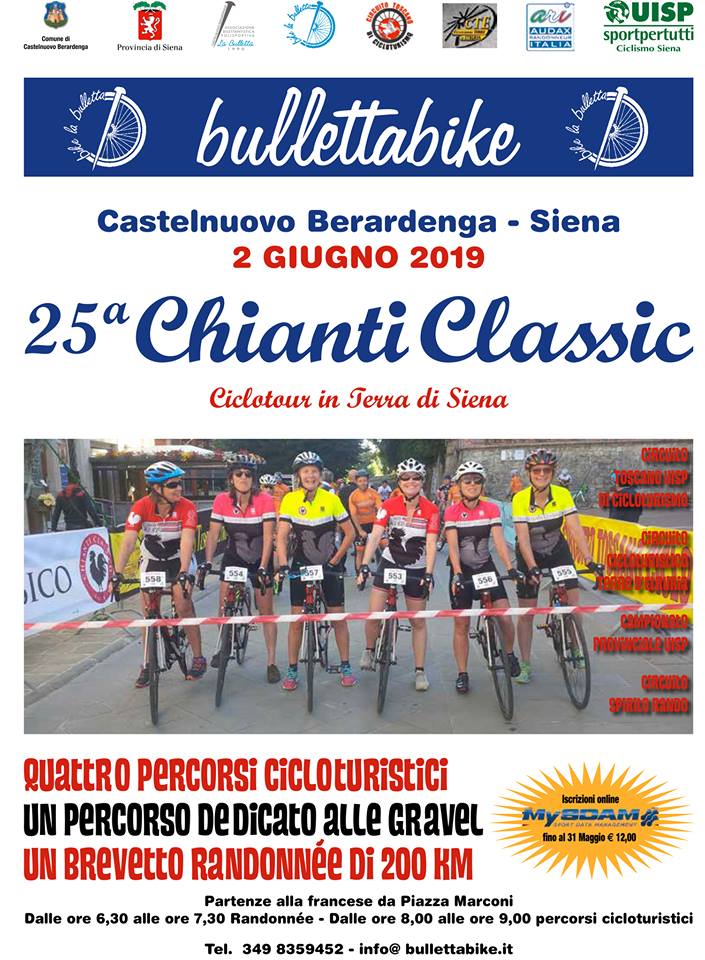 Articolo disponibile anche in: ItalianThe next Chianti Classic on June 2nd will be the

The next Chianti Classic on June 2nd will be the 25th edition.

Born in 1995 in Gaiole in Chianti, it has changed name a few times: started as “GF Bartali”, in the early 2000s it was called “GF Sorensen”, after 2005 it became “cicloturistica” and finally – under the management of Bullettabike – it became the Chianti Classic.

This cycling event is a quarter of a century old, and attracts fans to the Chianti territory, which is a good friend of bicycles and cyclists.

This twenty-fifth edition will be a confirmation of our philosophy: a great passion for the bike and for our land, with renewed and unique, incomparable paths. An event that combines the physical strain and the beauty of our villages, of our streets, colours and smells. We’ll welcome the many friends who are coming back to visit us.

Last year we decided to modify the routes, and the location of the refreshment points.

We also added the experience of Gravel roads, and changed from manual stamp control to barcode readers, but keeping the management of the refreshments and the pasta party.

The final result was excellent, with over 500 very satisfied participants and organisers happy to have passed the challenge.

In general everything will remain the same in the next edition, save for a few modifications: we worked on the arrangement of some parts of the routes, removing the Strolla climb, from the Rando and Lungo routes and adding the Rocca delle Macie climb.

Other changes will affect the Percorso Medio (medium path) that will not pass through Monteluco – and the addition of some new unpaved path on the Gravel route.