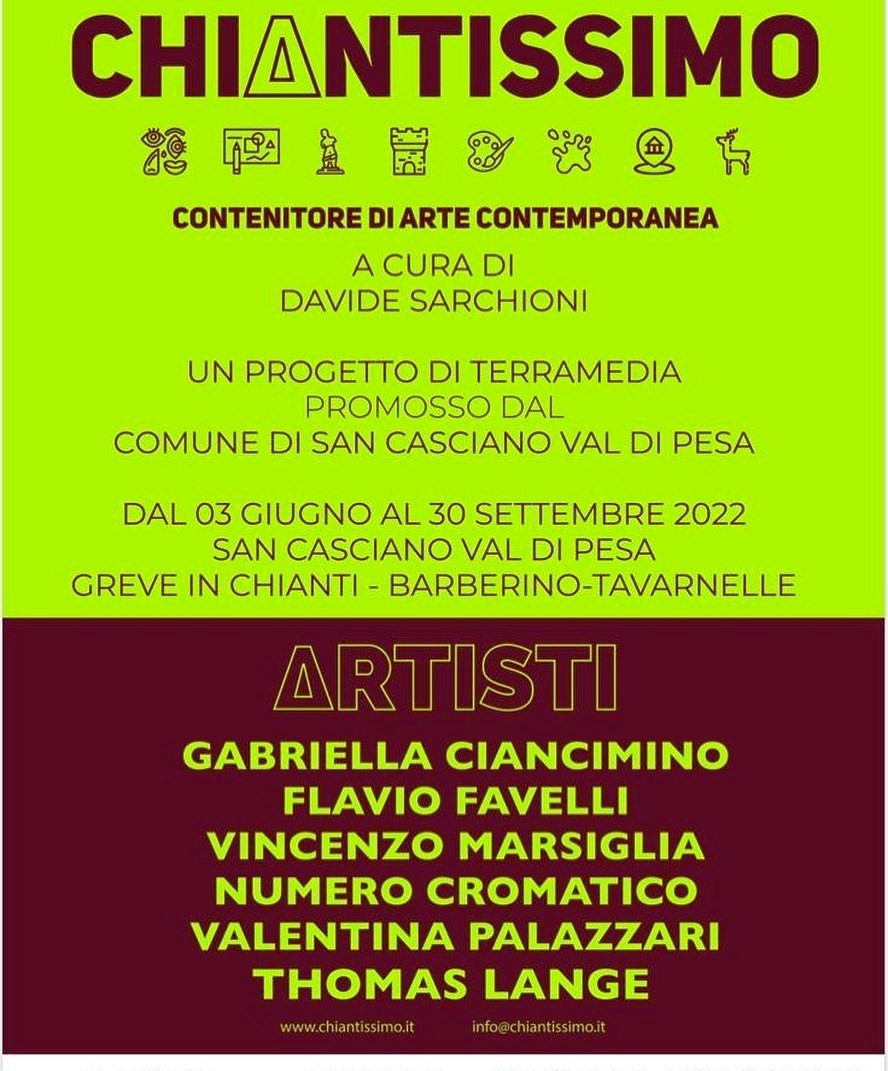 Contemporary art that reinterprets and affects the cultural landscape, travels long distances in an itinerant form and offers new visions and angles on reality, takes root in the Florentine Chianti.

The art of the present, material and digital, establishes unprecedented points of contact, intellectual and sensorial ties, with the monuments, buildings and public spaces of the municipalities of San Casciano, Barberino Tavarnelle and Greve in Chianti, generating new languages ​​and “sites specific”.

It is the most famous hilly area in the world, a land of wine, oil, inhabited over the centuries by intellectuals, writers, artists, navigators, to welcome creativity and to open the doors to contemporary art in an unprecedented dialogue with those who he lives it, inhabits it, visits it.

From 5 June to 30 September, the Chiantissimo contemporary art container returns in a richer, extended, moving edition.

A contemporary art project that this year from San Casciano, the leading municipality, extends its gaze to the Chianti municipalities of Greve in Chianti and Barberino Tavarnelle.

The initiative, which started last year with the aim of countering the negative effects of the pandemic, relaunching and promoting existing artistic resources and creating new ones, proposes contemporary art, public culture as a driving force for tourism in an even more seductive formula. -economic, artistic language intended for the involvement of the public, expressive opportunity entrusted to a selected group of contemporary authors.

The curatorship is signed by Davide Sarchioni, an art historian of international importance, flanked by the skills and professionalism of the cultural operator Fiammetta Poggi.

Chiantissimo, a place and cultural space to live and share in relation to the environment, the history and the identity roots of one of the most prestigious areas on a world scale, looks like a three-stage journey.

This is one of the novelties of the year, distributed in the months of June, July and September, characterized by the gradual placement of new works and artistic projects.

In the first stage, which will last until the beginning of July, there are a total of 6 artists who will intervene in the three municipalities of Chianti.

Three of them carry out public art interventions as authors and authors of site specific for the territory.

These are Gabriella Ciancimino, Flavio Favelli and Numero Cromatico whose artistic signs were developed for San Casciano.

As for the works that are part of the “site specific” session for San Casciano, Gabriella Ciancimino created a walldrawing inside the municipal library.

Flavio Favelli will present a large “sign” inserted in the Stianti Parking area.

Numero Cromatico proposes an urban intervention in the historic center that involves the Piazza dell’Orologio and the adjacent streets.

And again, as part of the exhibition session, in San Casciano, Vincenzo Marsiglia will perform a digital performance inside the Niccolini Theater.

In Greve in Chianti, the San Francesco Museum hosts an intervention by Thomas Lange, presented as a dialogue with the permanent collection of ancient art.

In Barberino Tavarnelle, Valentina Palazzari is part of the evocative Chapel of San Michele Arcangelo in Semifonte.

In the second stage, which will unfold from July, the interventions will reinterpret some of the emblematic places of Chianti in an artistic key.

And specifically the Torre del Chianti in San Casciano, the Romanesque church of Sant’Appiano and the Antiquarium of Barberino Tavarnelle with the participation of a new group of artists.

The third stage, scheduled for the end of September, is the first edition of Chiantissimo Prize, which will identify the work, among those present in the 2022 art container, most in tune with the characteristics of the site in which it was placed.

The work, which will be awarded the prize after being evaluated by a commission of experts, will become part of the nascent contemporary art collection of the Municipality of San Casciano.

In addition to the works “in situ”, Chiantissimo proposes an itinerary of selected works by the invited artists, entitled “Chiantissimo 2022. The Cultural Landscape”, which will be exhibited along the course of the three stages in different places and contexts of particular historical-artistic importance. and landscaping scattered between San Casciano, Greve in Chianti and Barberino Tavarnelle.

The map with the indications of the artistic itineraries to discover the works of Chiantissimo is available on the web tools and social channels, accompanied by updates on the various events that will gradually take place in the area.