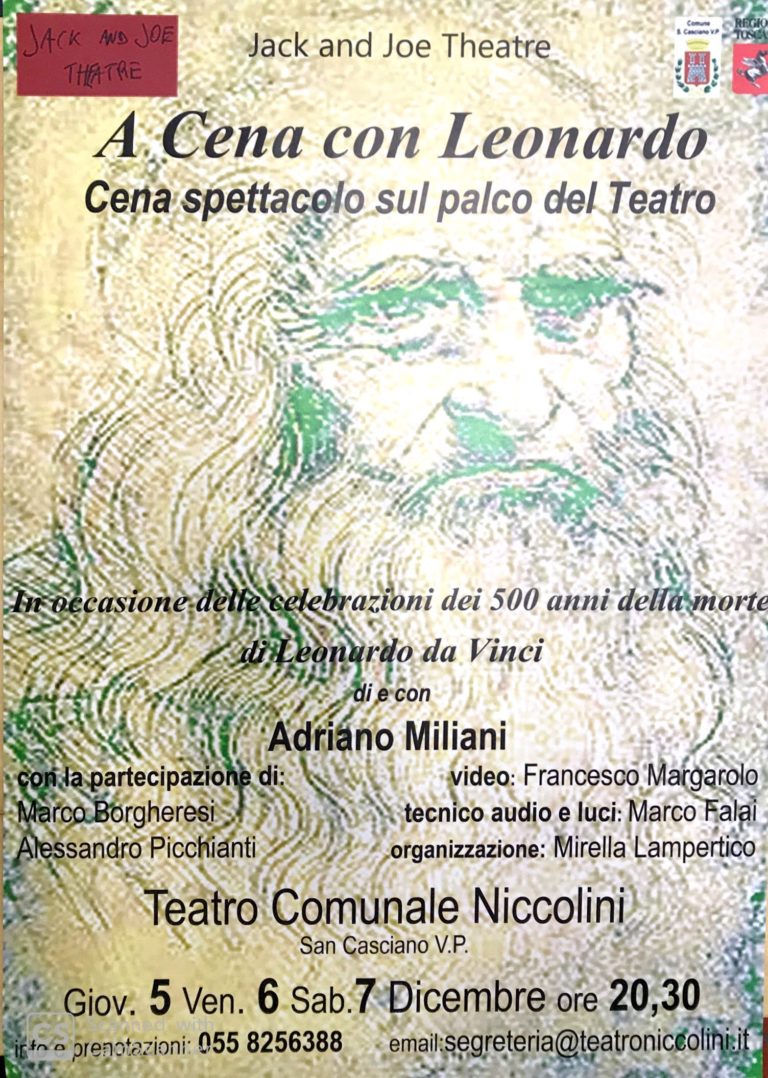 An unmissable dinner, the one that will take place on the stage of the Teatro Niccolini in San Casciano Val di Pesa, one of the most interesting theaters in the

An unmissable dinner, the one that will take place on the stage of the Teatro Niccolini in San Casciano Val di Pesa, one of the most interesting theaters in the Florentine province. The participants will be waited on by no less than Leonardo da Vinci.

“A cena con Leonardo” (“Dinner with Leonardo”) is the show presented by The Jack and Joe Theatre as a national premiere – in collaboration with the Municipality of San Casciano and the support of the Regione Toscana.

This is one of the events that celebrate the 500th anniversary of Leonardo da Vinci’s death. When will this special dinner be served? On Thursday 5th, Friday 6th and Saturday 7th December (8.30 pm) at the Teatro Comunale Niccolini.

This will surely be a unique experience, as the spectators have the chance to meet the most famous innkeeper in history: Leonardo da Vinci.

There’s an anecdote in Leonardo’s life that recounts that Leonardo in his youth might have opened a tavern in Florence together with Sandro Botticelli.

It was called “Le Tre Rane” and was located near the Ponte Vecchio. Apparently he also designed various kitchen tools and “machinery”, as part of this short but significant experience.

During the dinner, the guests/spectators will be sitting at a table on the stage of the Teatro Niccolini, and will be entertained by the landlord, who will recount fascinating anecdotes about his public and private life.

They’ll hear about how Leonardo’s passion for flight was born, the complex history of the Sforza horse, his relationship with Niccolò Machiavelli.

Throughout the evening spectators will be able to try their hands at small games of manual dexterity, puzzles and Renaissance dances.