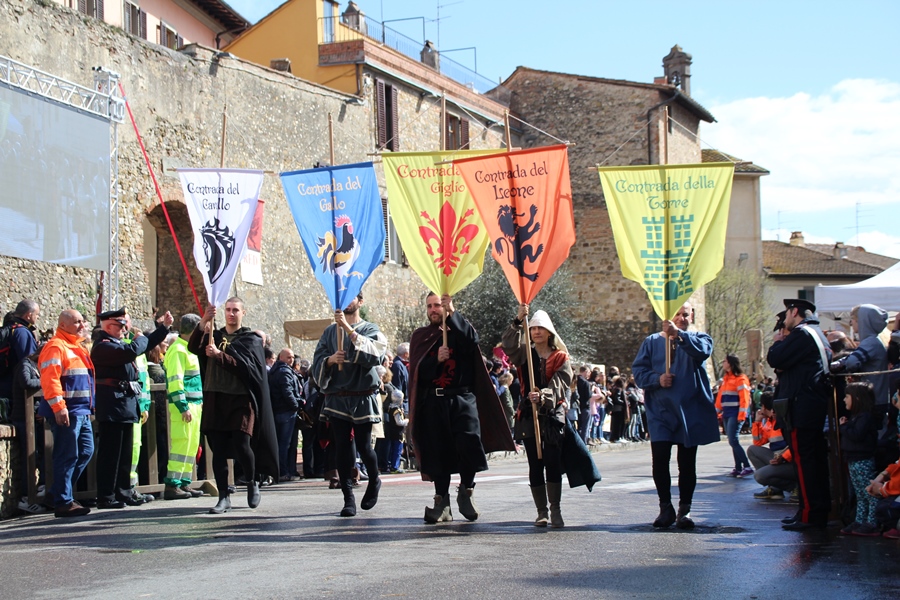 Creativity and costumes are preparing to "besiege" San Casciano Val di Pesa. The great show of the Carnevale Medievale Sancascianese is back, a re-enactment that opens the spring event calendar with

The great show of the Carnevale Medievale Sancascianese is back, a re-enactment that opens the spring event calendar with a great show and a competition between the different “contrade” (districts) to win the keys to the village.

For the past nine years, the Chianti municipality has enjoyed the success of an event that combines popular traditions, artistic creativity, craftsmanship and historical research.

Once again the key players are all from San Casciano, who will become actors, directors, set designers, dancers, musicians and playwrights for this special day.

On Sunday March 25th from 11am to 7pm you’ll be able to enjoy spectacular parades with thousands of actors and original performances that will take San Casciano back in time, to the second half of the 14th century.

A parade will open the show, allowing the public and the jury, positioned in the gallery of honour, to admire the spectacle of each district. This year the carnival will have an exceptional “palio” (a Medieval-style banner) made by embroiderers from San Casciano.

The five districts (Gallo, Giglio, Cavallo, Torre, Leone) will have to prove themselves against the backdrop of a famous battle fought by Castruccio Castracani.

There will be great stagings, costumes and the interweaving of theatricalised stories based on Medieval themes and the game’s regulations. Maxi screens will provide great visibility.

San Casciano is ready to take a dip into its past. The magical atmospheres will be enriched by various entertainments, such as the medieval market in the historic centre, the street shows in the heart of the Arena within the walls, the encampment in Piazza della Repubblica and the final dinner in the Poggione Park.