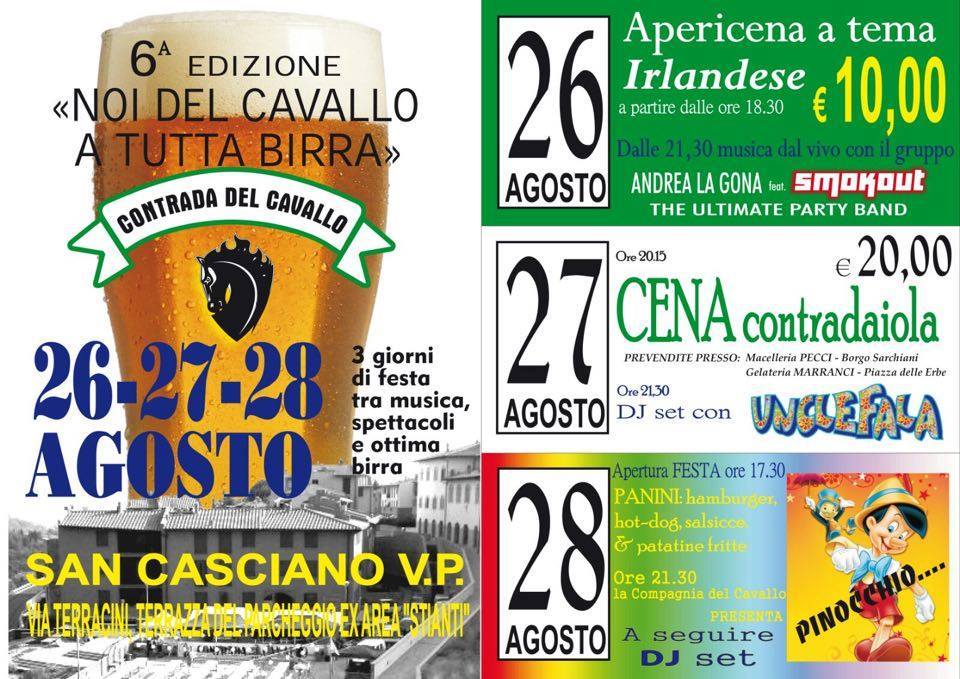 Articolo disponibile anche in: ItalianThe sixth edition of the beer festival of the contrada

The sixth edition of the beer festival of the contrada of the Cavallo (horse) begins on the terrace of the ex Stianti parking lot, in the heart of San Casciano.

“Noi del Cavallo a tutta birra” (“Full speed ahead with the Cavallo”) will take place on August 26, 27, and 28. The three evenings will be organized according to a time tested model.

We begin on Friday, August 26 with a happy hour/dinner with an Irish theme, beginning at 6:30 p.m. (10 Euros); Starting at 9:30 p.m., Live music with the group, Andrea La Gona, featuring Smokeout, “The ultimate party band”.

Saturday, August 27, at 9:15 p.m.… the grand dinner of the Contrada (20 euros): pre-sale at the Pecci butcher shop or the Marranci Gelateria. DJ set with Unclefala will follow.

Sunday, August 28, opening at 5:30 p.m. Sandwiches, hamburgers, hot dogs, sausages and obviously…beer. At 9:30 p.m., everyone on the stage with the Cavallo Company, which will present “Pinocchio”. The evening will end with a DJ set.