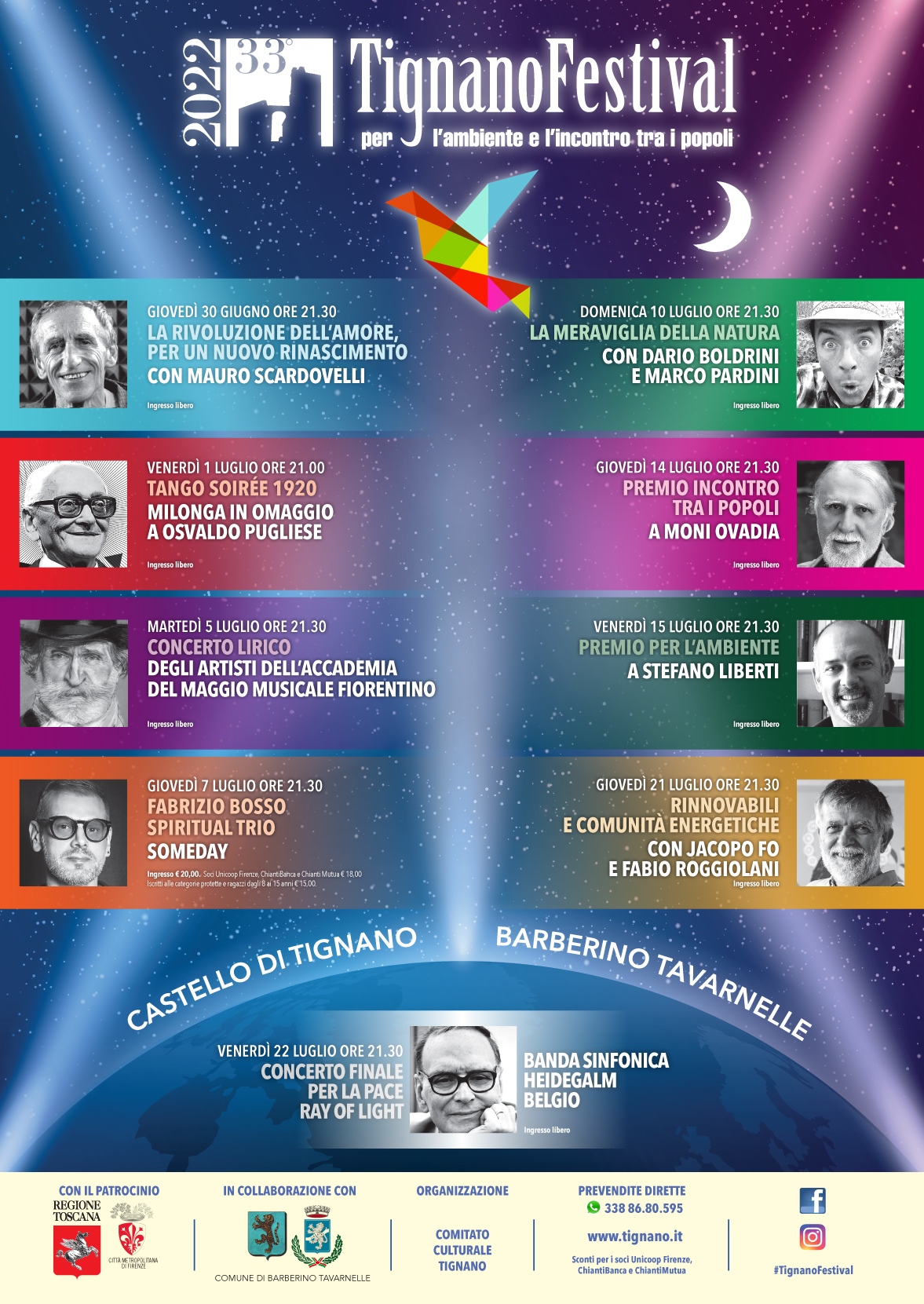 After two years of waiting, the stage in the square of the Castle of Tignano returns to shine with eight evenings of culture and entertainment (starting time 21.30) to reflect

After two years of waiting, the stage in the square of the Castle of Tignano returns to shine with eight evenings of culture and entertainment (starting time 21.30) to reflect and raise awareness on the issues of the environment and the encounter between peoples.

The Tignano Festival for the environment and peoples is back.

Thursday 30 June opens the Festival with the meeting The revolution of love, for a new Renaissance that sees the psychotherapist, jurist and music therapist Mauro Scardovelli as protagonist. Free admission.

Friday 1 July is the evocative atmosphere of Tango 1920, a tribute to Osvaldo Pugliese, conductor and composer of the time.

Several couples of tangueros from all over Tuscany animate the castle. Free admission.

Thursday 7 July appointment with the international jazz of the Spiritual Trio, one of Fabrizio Bosso‘s most fascinating projects in which the trumpeter, with the organist Alberto Marsico and the drummer Alessandro Minetto, pays homage to black music declined in its Gospel and Spiritual variant. Admission 20 euros.

Sunday 10 July The wonder of nature is narrated by two masters: Dario Boldrini, the “Planetary Gardener” and Marco Pardini, the “Piantastorie”.

Chianti and the Apuan Alps are the pretext to amaze the public by illustrating the miracles of Mother Earth. Free admission.

On Thursday 14 July, the Incontro tra i Popoli Award will be given to Moni Ovadia, theater man, civil and social rights activist. Free admission.

Thursday 21 July we talk about renewable energy and energy communities with the writer, cartoonist, actor and ecologist Jacopo Fo and the environmentalist and expert Fabio Roggiolani. Free admission.

The Festival closes its doors on Friday 22 July with the Ray of light concert for peace by the Heidegalm Symphonic Band from Belgium, conducted by maestro Kristof Aerts. Free admission.