Six shows and two non-subscription events will liven up the 2016 – 2017 theatre season at the Vittorio Alﬁeri town theater of Castelnuovo Berardenga. “Teatro e Letteratura” is presented once

Six shows and two non-subscription events will liven up the 2016 – 2017 theatre season at the Vittorio Alﬁeri town theater of Castelnuovo Berardenga. “Teatro e Letteratura” is presented once again with the collaboration of the “Toscana Spettacolo” Foundation and under the artistic direction of “Lo Stanzone delle Apparizioni” . 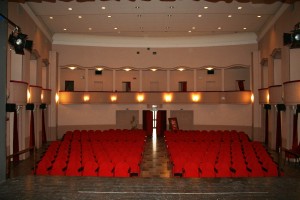 “Il giro del mondo in 12 anni; avventure d’un toscano con gli occhi aperti” (Around the World in twelve 12 years; adventures of a Tuscan with his eyes open), ﬁrst of two non-subscription appointments by “Teatro e Letteratura” which returns with the usual poetic introduction by the author, beginning at 6:45 PM and followed by a buffet dinner at 8 PM and a staged reading at 9 PM.

“Il giro del mondo….” is directed by Daniela Morozzi and Matteo Marsan and interpreted by Giuseppe Scuto and the students of the Alﬁeri theatre workshop. Music is curated by Giacomo Rossi.

This show offers a vivacious and unusual account of a young Florentine merchant who, between 1594 and 1606, crossed the globe and met their peoples, learning different thoughts and lifestyles.

“Teatro e Letteratura” will return as protagonist at the Vittorio Alﬁeri Theatre on Saturday, February 25, with “Il nemico in casa, women and female writers of Algeria”, by Matteo Marsan and interpreted by Giuseppe Scuto and Daniela Morozzi, accompanied by the music of Stefano “Cocco” Cantini.

The theater season will continue on Monday, January 8, with the ballet, “Cenerentola” (Cinderella), in its national debut. Choreographer is Roberto Sartori for Kaos Balletto of Florence; on Saturday, January 21, the comedy by Nuzzo and Di Biase, “Gli impiegati dell’amore”; Thursday, February 2, “Sotterraneo” will present its original adaptation of “Around the world in 80 days-story game between Jules Vern and Sotterraneo”, to be repeated on Friday, February 3 at 10 AM for schools.

All shows will begin at 9:15 PM Subscriptions and tickets can be reserved with the theatre secretary by contacting the number 0577-351345 from Tuesday to Friday, from 10 AM to 1 PM and on Saturday from 10 AM to 7 PM. They can be picked up at the box ofﬁce the evening before the show.