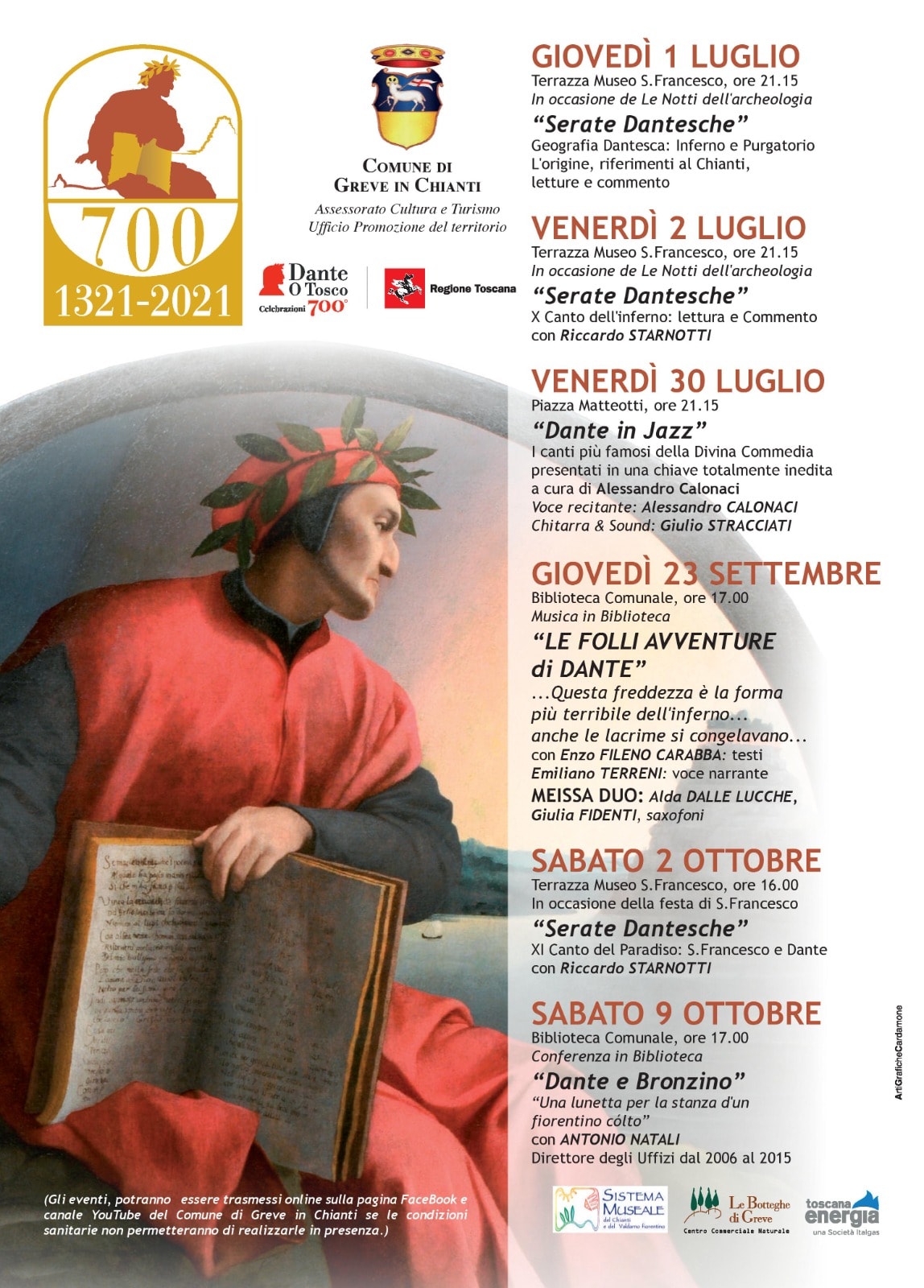 Articolo disponibile anche in: Italian“And so we went out to see the stars again

“And so we went out to see the stars again …” in the Dante evenings promoted and organized by the Municipality of Greve in Chianti.

The Supreme Poet, on the occasion of the 2021 Celebrations for the 700th anniversary of the death of Dante Alighieri, is the absolute protagonist of the rich cultural program that parallels readings, concerts and conferences in the public spaces of the municipal area, inspired by Dante’s extraordinary literary architecture, cornerstone of the Italian language.

The initiative opens its doors on Thursday 1 July at 9.15 pm on the terrace of the San Francesco museum on the occasion of the Nights of Archeology with a meeting-readings on Dante’s geography, between Hell and Purgatory, on the origin and references to Chianti.

In the same venue, the following evening, Friday 2 July at 9.15 pm, Riccardo Starnotti will read and comment on the tenth canto of hell.

“Dante in Jazz” is the event that will host Piazza Matteotti on Friday 30 July at 9.15 pm.

At the center of the evening the narrator of Alessandro Calonaci,
accompanied on the guitar by Giulio Stracciati, in the performance of
Most famous songs of the Divine Comedy, presented in a key
unpublished.

The doors of the municipal library will open on Thursday 23 September
at 5 pm for an event poised between music and lyrics with Enzo Fileno
Carabba, Emiliano Terreni and the Meissa duo, with Alda Dalle Lucche and Giulia Fidenti.

The last two initiatives, scheduled for 2 and 9 October, propose, the first, an event on the terrace of the San Francesco Museum (4 pm) with the readings of the eleventh Canto del Paradiso by Riccardo Starnotti; the second a conference in the municipal library (5 pm) with Antonio Natali, former director of the Uffizi from 2006 to 2015, on the relationships between Dante and Bronzino, author of a painting depicting the poet.