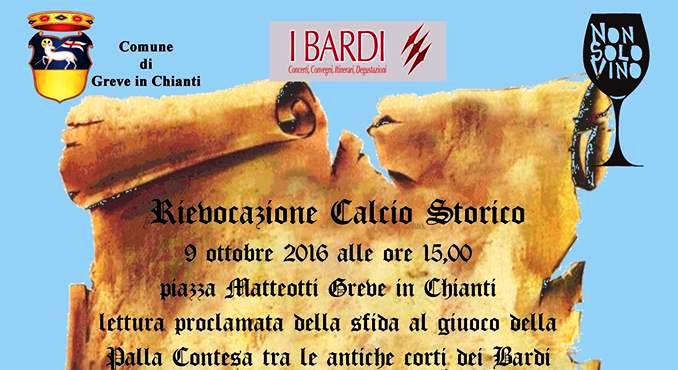 An unusual challenge will take place on Sunday, October 9, in Greve in Chianti… a game of historic soccer.

At 11 AM, in the Town Hall of Greve, the Bardi Academy of Vernio will present “Discorso sopra il giuoco del calcio” (speech about the game of soccer).

At 3 PM, in Piazza Matteoti there will be a reading of the ”Sﬁda all’antico giuoco del calcio fra la Podesteria di Greve e la Lega della Valle di Cintoia” (old-fashioned soccer challenge between the ‘Podesteria” of Greve and the League of the Cintoia Valley). Along the streets of the town of Greve,  the “Corteo Storico” (historic parade) of Pontassieve will march, with an exhibition of dames, horsemen and music.

This will be followed by the “Rievocazione Calcio Storico” (historical re-enactment of soccer)  between the “Podesteria” of Greve and the League of the Cintoia Valley at the soccer ﬁeld in Via Giuseppe Garibaldi 125, Greve in Chianti.

During the event, there will be a stand beneﬁting the Friends of Lapo Onlus, an association from Impruneta which is involved with the Kawasaki Syndrome, www.gliamicidilapo.org. Tickets: 7.5 Euros. Children under 10 are free.