21giu21:1523:15Greve Opera Academy: concert in the church of Santa CroceGreve in Chianti 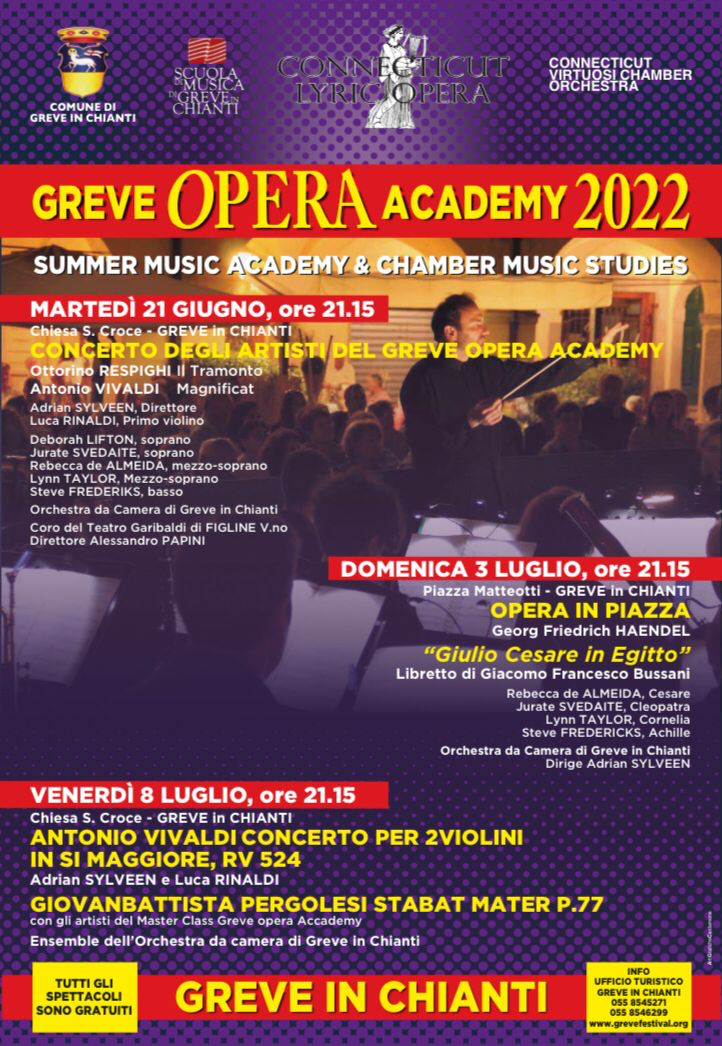 The rich program of the Greve Opera Academy kicks off, scheduled until 8 July.

The initiative aims to give citizens and tourists performances of the highest level in Greve in Chianti, in Piazza Matteotti and in the church of Santa Croce.

The faculty of the Summer Music Academy & Chamber Music Studies is made up of prestigious teachers who have trained the singers participating in the Master Class on the performance of some pieces taken from the most famous works.

The violinist Adrian Sylveen, founder and soul of the group, took care of the artistic direction and the stage.

The performances will be accompanied by the Greve in Chianti Chamber Orchestra and the violinist Luca Rinaldi.

The events of the festival start on Tuesday 21 June at 9.15 pm, in the church of Santa Croce, with the concert of the artists of the Greve Opera Academy.

Who will perform music by Respighi and Vivaldi, enriched by the participation of the Chorus of the Teatro Garibaldi in Figline Valdarno, directed by Alessandro Papini.

The next event, scheduled for 3 July in Piazza Matteotti at 9.15 pm, is the work of Georg Friedrich Haendel “Julius Caesar in Egypt”, based on a libretto by Giacomo Francesco Bussani.

The opera, conducted by Adrian Sylveen, will be performed by the Greve in Chianti Chamber Orchestra.

The final event of the review is the concert in the church of Santa Croce in Greve in Chianti, scheduled for July 8 at 9.15 pm, with Adrian Sylveen and Luca Rinaldi.

Who will perform in a concert by Antonio Vivaldi (Concerto for two violins in B major) and the artists of the Master Class, accompanied by the Ensemble of the Chamber Orchestra of Greve in Chianti, protagonists of Giovan Battista Pergolesi’s masterpiece, Stabat Mater P77 .

The shows in Piazza Matteotti and in the church of Santa Croce are free.