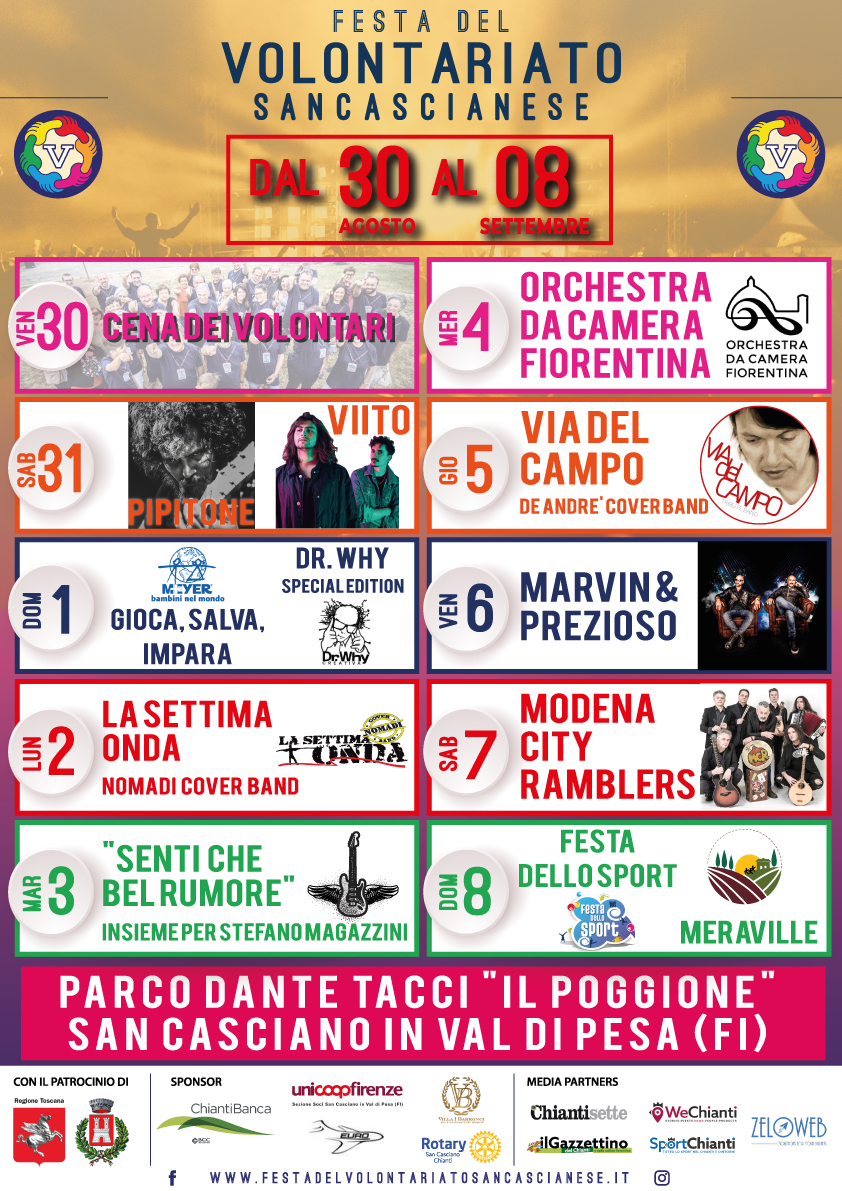 End of summer, time for the Festa del Volontariato Sancascianese: more than twenty associations, volunteers at work in the artistic planning and in the logistic and management organization of ten

End of summer, time for the Festa del Volontariato Sancascianese: more than twenty associations, volunteers at work in the artistic planning and in the logistic and management organization of ten days of events

A very rich calendar (every evening restaurant open with local specialties), mostly music, which will animate the Dante Tacci Park, in San Casciano, from 31 August to 8 September.

On 2 and 4 September the cover bands will be on show, the Settima Onda with a tribute to the Nomadi group and Via del Campo that will retrace some of the most famous successes of Fabrizio De Andrè.

The memory becomes a collective memorial to share Stefano Magazzini‘s great passion for music. The Festa del Volontariato will extend its long embrace to the man who died prematurely with the evening event “Senti che bel rumore, insieme per Stefano Magazzini”, scheduled for September 3rd.

Even the classic will have its space inside the billboard with the performance of an exceptional orchestra, scheduled for September 4th. It is the Florentine Chamber Orchestra, conducted by Giuseppe Lanzetta.

Special Guest of the edition number 13 the band born in the 90s the Modena City Ramblers that will return to tread the scenes of the event on September 7th.

More music, in this case dance with Marvin & Prezioso on September 6th and Viito, new phenomenon of the Italian indie scene, on August 31st.

The last appointment is a tribute to the values ​​of sport and to the numerous associations of San Casciano which on September 8th will show passion and skills in the various disciplines set up, with demonstrations and performances by the instructors and students, in the Poggione Park’s outdoor spaces.

One Sunday, the final one, which you can start living in the morning (8 am departure from the Dante Tacci Park) adhering to the original “Meraville” path, a playful and sporting walk among vineyards, paths, dirt roads and some of the most historic villas prized of the territory that, on this occasion, will open their monumental gardens to the passage of the participants.