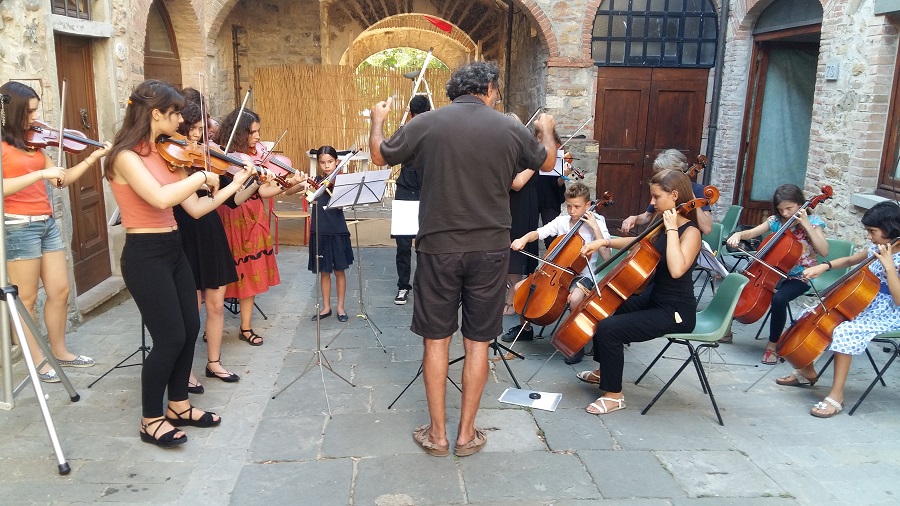 Articolo disponibile anche in: ItalianThe 12th edition of “Chianti in Musica” is back

The 12th edition of “Chianti in Musica” is back and ready to fill San Donato in Poggio with music. It introduced itself to those who weren’t already familiar with the event over the last few days. Sign up is until July 12 (www.chiantinmusica.it)

During a tribute to the super student, Leonardo Zoncati, and an inaugural toast at Palazzo Malaspina, the founders told those present (including the mayors of Tavarnelle and Barberino Val d’Elsa) about the unforgettable past performances and pre-announced the contents of the next edition.

The formula for 2017 is almst identical to the last. From Juy 22 to July 29 there will be a rich program of events: during the day there will be courses led by nationally important teachers; the evening will feature musical happy hours starting at 6:30 PM and concerts, all free of charge, starting on Sunday, July 23, at the Porta Fiorentina.

Three important appointments should not be missed: the exhibition by teachers and their best students, on Thursday, the 27th, at 9 PM; the musical marathon with double concert, mixed with happy hour, on Friday the 28th at 6:30 PM; the piano concert for the grand finale on Saturday, July 29.

The party in the piazza on Wednesday, July 26, will solidify the tie between the suggestive village and the event. There will be “tombola” with prizes and music which will be fun and an opportunity to collect funds.

““Chianti in Musica” started almost as a game,” begin the founders, Adriana Armaroli and Marta Ceron. “Over the years it grew, and the rapport with Chianti transformed into reciprocal affection. It is always a very intense experience, both musically and humanly”.

“Today,” they continue “we are here to revisit the town and assure them that we will return. We hope to involve even more people and tourists in the area. We have positive aspirations. We already have many signed up, both habituès and newcomers. They come from all of Italy and from all over the world: America, Cuba, Irlanda, Svizzera, Canada, Hong Kong”.

“The students, between the ages of 12 and 27, are very motivated and diligent. During this beautiful week, they can mix study with fun. An added value are the friendships they create”.

“San Donato makes us feel at home,” conclude Adriana e Marta.”Moreover, it is magic, stupendous. We asked ourselves if we could move the event somewhere else, and the answer was no”.

“Chianti in Musica” has the patronage of the Town Union of Chianti Fiorentino, the Fondazione per la Tutela del Chianti Classico Onlus, the Associazione Culturale Pro Loco and the Circolo della Filarmonica di San Donato in Poggio (who also hosts the events in case of bad weather).