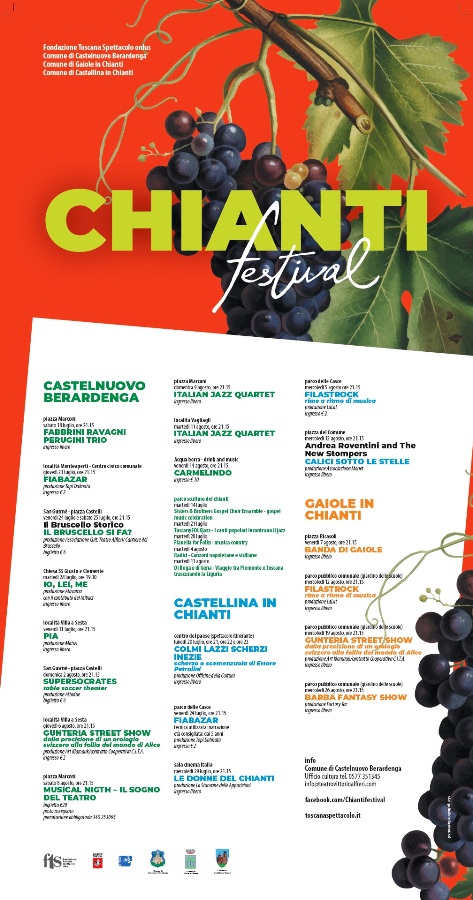 Articolo disponibile anche in: ItalianThe Municipalities of Castellina in Chianti, Castelnuovo Berardenga and Gaiole in Chianti respond to the

The Municipalities of Castellina in Chianti, Castelnuovo Berardenga and Gaiole in Chianti respond to the Covid-19 emergency with a new edition of the Chianti Festival, whith the collaboration of Fondazione Toscana Spettacolo onlus and the artistic direction of Matteo Marsan.

All shows will begin at 9.15 pm and will take place in compliance with anti Covid-19 security measures.

Almost all appointments are free admission, except for some events where an entrance ticket between 2 and 10 euros is provided.

The Chianti Festival will start on Saturday 18 July from Castelnuovo Berardenga with the musical performance of the Fabbrini Ravagni Perugini Trio in Piazza Marconi, with Franco Fabbrini on the electric bass, Luca Ravagni on the sax and Diego Perugini on the guitar.

Monday, July 20, the event will make its debut in Castellina in Chianti, with the traveling show “Colmi Lazzi Scherzi Inezie – Scherzo or scemenzuola by Ettore Petrolini” which will animate the center of the hamlet starting at 9 pm with Stefano Ferri and the complicity of the Multiethnic Orchestra of Arezzo: Massimo Ferri on guitar, Luca Roccia Baldini on double bass, Gianni Micheli on clarinet and Mariel Tahiraj on violin.

Tuesday, July 21 the Chianti Festival makes a stop in the Chianti Sculpture Park, in Pievasciata (Castelnuovo Berardenga) with TuscanyFOLKjazz – Popular songs meet jazz, while Thursday July 23 the Chianti Festival will arrive at the municipal civic center of Monteaperti with Fiabazar, children’s show in the company of the Dalmatian Mouse Association, held on Friday 24 July in the Casce Park in Castellina in Chianti (entrance ticket 2 euros).

On Friday 24 and Saturday 25 July, the traditional appointment with the Bruscello Storico is renewed in the hamlet of San Gusmè, a tribute to the popular theater that mixes the tradition of the eighth rhyme with contemporary musical interventions and scenic settings with great visual impact (entrance ticket 6 Euros).

The show will be hosted, as every year, in Piazza Castelli and will see on stage the actors of the Teatro Alfieri Cultural Association and the Cantiere del Bruscello.

The Chianti Festival will also remain on the territory of Castelnuovo Berardenga on Tuesday 28 July with a double appointment: the dance performance Io, lei, me in the Church of the Santissimi Giusto e Clemente – organized by the Atacama company with the contribution of MIBACT, Ministry of Goods and Cultural and Tourism Activities – Department of Entertainment – and Flanella for Folks – country music in the Chianti Sculpture Park, in Pievasciata.

The Chianti Festival will then return to Castellina in Chianti on Wednesday 29 July, in the Sala del Cinema Italia, with the show Le donne del Chianti curated by Daniela Morozzi and Matteo Marsan and produced by Lo stanzone delle Apparizioni.

On Friday 31 July the event will move to the hamlet of Villa a Sesta for a new appointment with dance, Pia, by Motus Danza.

The appointments in August with the Chianti Festival will begin on Sunday 2 August in San Gusmè, in Piazza Castelli, with the prose show Supersocrates – table soccer theater with the Household Appliance Theater (6 euro entrance ticket), while on Tuesday 4 August the Chianti Sculpture Park, in Pievasciata will host Radici – Neapolitan and Sicilian songs.

Wednesday 5 August the Casce Park, in Castellina in Chianti, will frame the show for the little ones Filastrock, Rhymes to the rhythm of music produced by LaLut cultural association (entrance ticket 2 euros).

Thursday 6 August the Chianti Festival will return to Villa a Sesta with the magic and juggling of Gunter Rieber and his Gunteria Street Show, ready to involve children and their families including acting, pantomime, clowning and balancing on the high unicycle (ticket for admission 2 euros), while on Friday 7 August the Chianti Festival will arrive in Gaiole in Chianti, with the performance of the Banda di Gaiole in Piazza Ricasoli.

At 18.30 Piazza Citernesi will frame the meeting-aperitif with the actress Francesca Nunzi, who will present her new novels in a national preview. The initiative is free admission subject to availability and reservations are recommended at 340-2533065.

At 21.30, then, it will be the turn of Musical Night – The dream of theater, with the direction of Marco Predieri and the extraordinary participation of Giorgia Trasselli for an evening dedicated to big names in the Italian musical such as “Romeo and Juliet – love and change the world”,” Priscilla”,” Cats “and” Add a seat at the table”. The evening includes a compulsory reservation, at number 340-2533065, and a ticket at a cost of 20 euros.

On Sunday 9 August, music will still be the absolute protagonist in Castelnuovo Berardenga, in Piazza Marconi, with the Italian Jazz Quartet, produced by Lo Stanzone delle Apparizioni, in replication on Tuesday 11 August in the hamlet of Vagliagli.

On the same day the Chianti Sculpture Park, in Pievasciata, will host the last appointment with Di Bega and Gena – Journey between Piedmont and Tuscany overlooking Liguria.

In Gaiole in Chianti the municipal public park, in the school garden, will host the children’s show Filastrock, Rhymes to the rhythm of music produced by LaLut cultural association (with free admission), while in Castellina in Chianti the music of Andrea Roventini and The New Stompers in the evening of Calici di Stelle next to tasting of locally produced wines, astronomical observations and animation.

The Chianti Festival will return to the spotlight with a musical evening at the Acqua Borra, in the municipality of Castelnuovo Berardenga, scheduled for Friday 14 August with Carmelindo and his Brazilian author music (admission ticket 10 euros, including drink).

The next stop will be Wednesday, August 19 in Gaiole in Chianti in the company of Gunter Rieber and his Gunteria Street Show between magic, clowning and juggling.

The last appointment with the Chianti Festival 2020 is set for Wednesday 26 August in Gaiole in Chianti, in the municipal public park, with the Barba Fantasy Show: Edoardo Nardin, who will combine physical theater, circus and illustrations.

For information and reservations, you can contact the number 0577-351345 and the email address info@teatrovittorioalfieri.com.

To keep up to date, you can follow the site  www.toscanaspettacolo.it and the Facebook Page Chianti Festival.